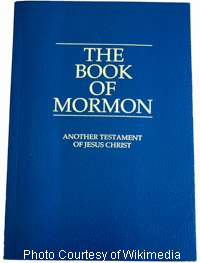 "He's a Buddhist." "I'm a Catholic." "You're no Christian!" "Infidel!" The labels we place on others and ourselves both facilitate and complicate the esteem with which we view others and others view us. Perhaps nowhere is that more pronounced than in the dialogue between Mormonism and its critics.

Consider the seeming tug of war between Mormons and others over the title "Christian." Some groups argue that only those who affirm the pre-eminence of the Bible as the basis for their belief system can properly claim the title. Many Mormons and others would argue that all who adopt the divine teachings and belief in Jesus Christ are entitled to such an identity.

It is a question filled with controversy, and carries with it the baggage of inclusion and exclusion. For example, Mormons have been prevented from participating in the National Day of Prayer because the organizers did not consider Mormons to be "Christian." Yet ask any Mormon if he or she is a Christian, and the answer will almost certainly be a resounding "Yes!"

So, who gets to decide your identity? In some ways, it is a combination of how you label yourself, and how others apply labels to you, but mostly it is how you live your professed beliefs. For years, Mormons fought the epithet "Mormon," which originated as a derogatory term intended to engender distrust by early critics. It arose because of the LDS Church's inclusion of the Book of Mormon among its sacred texts along with the Bible.

The Church of Jesus Christ of Latter-day Saints tried to shake off the label, encouraging media outlets to use the full name of the Church as outlined in style guides published on its website. However, as polygamous sects long since divorced from the main body were identified as  "Mormons" in articles and interviews, who "got" to carry that title became a point of contention for many mainline Mormons.  The once-awkward epithet transformed, and many Latter-day Saints now covet it as a proverbial scarlet letter of honor. As such, mainline Mormons encourage the qualifying term "fundamentalist" be used when speaking of many offshoot groups.

One unique belief of most who identify themselves as Mormons is the continuing revelation from God through prophets. Within the various self-identified Mormon communities, the question is "who is that prophet?" The largest and mainline Mormon Church believes it has been the most senior living apostle since the death of Joseph Smith. Offshoot organizations have claimed that the main church has been led astray and God has raised up new leaders outside the mainline hierarchy, who now speak on behalf of the "true" believers. At the core is the question of who can speak for the group.

In the mainline LDS Church, it is the President of the Church, often referred to as "the prophet." This person is the most senior living Apostle, and is ordained President of the Church by the other surviving Apostles whenever a President passes away. Others serve with him as counselors, and constitute the First Presidency, a quorum generally of three who constitute the highest governing body of the Church. This vacancy is then filled within the Quorum of the Twelve Apostles with the calling of a new junior Apostle who may some day survive to guide the Church as President.

However, all of these men, including the First Presidency and Quorum of the Twelve Apostles, are revered as Prophets, Seers, and Revelators. They carry a mantle of authority respected by the Church membership that is almost unique in the world. But even these men, while united in their direction of the Church, differ in life experience, approaches, and non-essential beliefs. This certainly influences their public remarks, and can even cause confusion to arise as to what represents reliable orthodoxy among Mormons.

This has opened the door for critics of Mormonism to mine comments from various leaders of the past and pit the words of one against another. This puts Mormon defenders in the position of reconciling irreconcilable teachings, or to clarify that we specifically believe in continuing revelation precisely because we recognize that our leaders are not infallible.  For a Church that sees a restoration of divine truth and authority as a core of its identity, this can be a challenging confession to make, but for me, it is what gives strength to Mormonism in general.

In the end, it is the canon of scripture as interpreted and sometimes expanded by its inspired-but-fallible leaders that is recognized as binding upon the Church and ultimately defines "what we believe." Interestingly, it is the epithet applied by those who would misrepresent us, and which we once eschewed but now revere, which most easily identifies us.

John Lynch is a Silicon Valley sales and marketing executive specializing in high-tech startup ventures. He is a member of the Board of Directors of FAIR, an LDS apologetics organization (www.fairlds.org,) and serves as its Chairman.