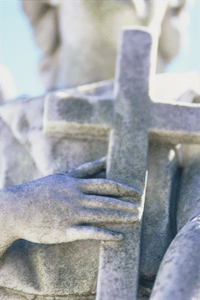 Sin, crucifixion, atonement, salvation ... as Christians, these words define who we are, yet often remain mysterious - even intimidating - to us in our everyday lives. In this regular column, Professor of Theology and Ethics Heidi Gehman sheds light on the words central to our faith. This week: sacrifice.

Sacrifice has become a loaded term in the Christian tradition. It is associated with a particular theory of atonement, where Christ's death on the Cross is viewed as a sacrifice to replace all ritual sacrifices. Because of Christ's sacrifice on our behalf, we no longer need to perform sacrificial rituals to appease an angry God.

The theme of sacrifice is also then carried over to describe one ideal for the Christian believer. We should sacrifice our lives for the sake of others, as Christ did for us. But here is where the controversy lies. The feminist movement rightly raises the concern that the ideal of sacrifice is often heavily prescribed for women, whose Christian purpose then becomes service to others, while men have been less burdened with such an ideal. In the worst scenarios, this Christian ideal of sacrifice has been used to encourage women to remain in abusive relationships, with the hope that their ongoing sacrifice and suffering will lead to the transformation of their batterer. That, as we have learned, is an unlikely outcome. Rather, such women may end up paying the ultimate sacrifice of their lives.

Nonetheless, sacrifice is a theme that runs through the biblical narrative and Christian understandings of love. Can the idea of sacrificial love be retrieved in a meaningful way for the Christian life? Is there justifiable self-sacrifice that doesn't become self-abnegation? Can it leave room for self-affirmation or self-love, currently a primary theme not only in Christian thought but in the wider culture of western society?

The answer, I believe, is yes, but with certain caveats. First and foremost is that Christian sacrifice and love should flow from a solid foundation of faith and self-knowledge. Feminists have pointed out that women who lack a coherent sense of self end up sacrificing in ways that do not benefit others or themselves. True self-sacrifice must involve a self who truly understands her own dignity and worth, and whose sacrifice enhances the dignity and worth of others. This is what Christ's sacrifice on the Cross did for all humanity.

Further, sacrifice should be redemptive. Sacrifice is not something done simply to reflect an inner sense of humility or lack of pride. It is not about becoming a victim for the sake of some illusory righteousness. It is for the purpose of something greater. As the Civil Rights movement illustrated, sacrifice can reveal the courage and power of those who seem to be powerless, and in the process it can transform society. True sacrifice springs from a sense of purpose, is active not passive, and serves the greater good.