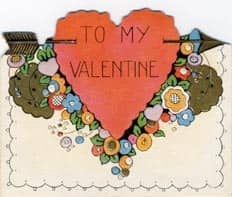 Modern Christians are often uneasy about holidays, especially in Protestant North America. The Puritans in the Massachusetts Bay Colony, for instance, banned the celebration of Christmas and penalized those who were caught celebrating it. It was thought to be a "Popish" and "pagan" holiday, owing much too much to the Roman festival called Saturnalia (after the great Latin god, Saturn). True Christians, these Purists argued, only celebrated Easter.

Still later, the whole domestic and private edifice of trees and turkeys and elaborate gift-giving (in part imagined as a reaction against the public drinking and wassailing) were a creation of the 19th century. And the evolution of that alternative tradition has many Christians on guard these days, trying to "keep the Christ in Christmas." Christ, it is feared, may have been trumped by Saint Nicholas. And twelve magically mysterious reindeer.

These same concerns are often voiced about Halloween. And now with Saint Valentine's Day as well. Is this a Christian or a pagan holiday?

If our starting point is the assumption that such a question is either/or, then we are almost sure to miss out on how interesting, and how lyrical, the subtle convergences between the Christian and the pagan could be in the ancient world.  And how lyrical they continue to be in a Romantic age such as ours.

Saint Valentinus. It was a common enough name in the Roman Empire, deriving as it did from the Latin word for worthiness (valens). There are no fewer than seven distinct saints bearing this name on various Christian saints and martyrs rolls, primarily Roman Catholic and Eastern Orthodox lists.

There was also an important early Christian teacher in Rome by the same name, a heretical teacher of Christian esoteric wisdom who left a movement called "Valentinian" behind; naturally enough, there is no feast day for this renegade. But recent scholars like Elaine Pagels have reminded us of his influence, and of his brilliance.

We might well wonder about this multiplication of saints with the same name (but, then, the New Testament itself is well aware of the confusion caused by the presence of multiple people with the same names—all those Johns and Simons and Marys to contend with).

The most relevant Valentinus related to this holiday was a Roman priest (literally called a presbyter) who was allegedly martyred under the Emperor Claudius Gothicus (the conqueror of Gaul) at some time between 269 and 273 C.E. The legend suggests that he was arrested for performing secret marriages for Roman Christians, and that after his arrest, the emperor took a liking to him...until the young priest used his advantage to attempt a conversion of the emperor. That's when Valentinus was condemned, first to clubbing and then to stoning. When that failed to finish him off, he was beheaded. The priest's body was buried at the side of the Flaminian Way on February 14.

The second major Saint Valentinus was a bishop of Interamna (modern-day Terni), a high church official who was allegedly arrested, brought to Rome, and martyred there. His remains were later transferred back to Terni. In many of these various Valentinus legends, the most dramatic family resemblances concern the close attention that is paid to their violent death, coupled with an interest in the dramatic fate of the corpse.

It is this linkage of love and violent loss that bears thinking about. It is an interest and a romantic preoccupation that Greek Christians and Greek pagans shared.

More confusing still is the Greek Orthodox liturgical calendar, since in it, February 14 is the feast day for no fewer than four major saints.

The first is Saint Auxentius who was originally from Cappadocia in modern-day Turkey, and who was appointed as bishop of Milan in 355 C.E. despite the fact that he could not speak Latin, only Greek. Though constantly harassed by accusations of heresy (Valentinianism, no less), he remained at his post until his death in 373 C.E. The Ides of February seem to make it harder to draw a sharp line between orthodoxy and heterodoxy.

The second is Saint Maro, who was a close friend to John Chrysostom, the celebrated and "golden-tongued" bishop of Syrian Antioch. Saint Maro gave his name to the movement of "Maronite" Christians, a group that celebrates an eastern liturgy composed by Chrysostom but that recognizes the political leadership of the bishop of Rome. They are prominent still in parts of Lebanon, Syria, and Cyprus. The Ides of February seem to make it harder to draw a sharp line between Eastern and Western Christianity as well.