What Billions of Muslims Think 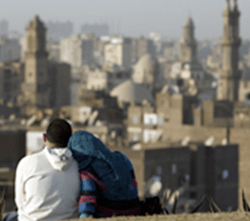 There are already certain things we know about the likely content and character of President Obama's speech to the Muslim world.  There are other things we can guess at. And there are some things we all should hope to hear.

In January, President Obama remarked that the U.S. has too often been dictating without listening, and that he will begin by listening. Clearly this President understands that regardless of your faith, people throughout the world have common hopes and aspirations, aspirations shared by a vast majority of Muslims-1.5 billion people-too.

We know, for example, that according to a recent 8-year poll of the Muslim world, the huge majority want-not jihad, but better jobs, We know they don't "hate us for our freedom" but rather fear us for our collateral damage, and that they want not revolution but rule of law.

We know that in Turkey, the president vowed that "America's relationship with the Muslim world cannot and will not be based on opposition to al Qaeda."

This feels refreshing. The fraction of 1% of the Muslim world that traffics in revolutionary sloganeering and violence has been hugely over-represented in global media and international foreign policy for years. In trying to understand who the world's Muslims really are, Obama has recently appointed to his Faith Advisory Council the head researcher of the Gallup Center for Muslim Studies, Dalia Mogahed, herself a Muslim. This shows a willingness to base policy on facts, not fear, always a worthwhile approach in foreign policy formulation.

We also know that Mr. Obama places a lot of confidence in Senator George Mitchell, who negotiated the impossible in Ireland and who now is the President's personal envoy in the Middle East. In January, Mr. Obama said:

"Sending George Mitchell to the Middle East is fulfilling my campaign promise that we're not going to wait until the end of my administration to deal with Palestinian and Israeli peace, we're going to start now. It may take a long time to do, but we're going to do it now. We are going to follow through on many of my commitments to do a more effective job of reaching out, listening, as well as speaking to the Muslim world."

Join the discussion on Obama's speech in Cairo.

We all have a personal interest in this matter, because in the last eight years and more, the relationship between the West and the Muslim world has strongly influenced the course of every nation on the planet.

For some of us, the interest is deepened even further by a choice of religions or by recent work: In my case, both. I'm an American born Muslim and my organization, Unity Productions Foundation, has just finished producing a film, entitled Inside Islam: What a Billion Muslims Really Think, based on the findings of Gallup's eight-year public opinion poll of the entire Muslim world.

This research bears directly on the very people whom Mr. Obama is addressing. It presents an alternative to the views of pundits and isolated western experts interviewed in TV all these years. It tells us what, in fact, the people themselves think and feel about a host of subjects, public and private. For the first time, policy makers can now base theory and new decisions on actual information derived from the people their policies will affect.

Inside Islam: What a Billion Muslims Really Think Trailer

The hour documentary film, Inside Islam: What a Billion Muslims Really Think, will premiere in Washington DC, by coincidence, a day before President Obama's speech in Cairo. Madeleine Albright will precede the screening with a major policy speech of her own on, guess what?  American policy and the Muslim world.

I have no idea what Mrs. Albright will say, but I'm as ready as the next interested party to take a guess at what the President will address, based on what he has told us already.

On Basic Respect - Interestingly, in the Gallup poll findings, the one thing Muslims around the world hoped to get from the United States was- not money, military support, or even democracy- but understanding and respect. This specifically relates to a wish for understanding and respect about Islam, which unbeknownst to many Americans, is a regular part of the fabric of most Muslims' lives. (Not the twisted militant cartoon of Islam that al Qaeda has fashioned to underwrite its activities, but the actual religion.)  I imagine this is why Mr. Obama took the trouble to say, in Ankara, that his foreign policy approach "will convey our deep appreciation for the Islamic faith, which has done so much over so many centuries to shape the world for the better - including my own country."