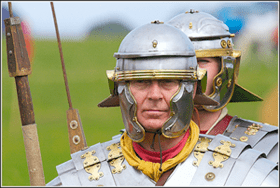 The Gospels only record two times when Jesus was amazed: once by the unbelief of the people, and once, in Luke 7, by the belief of a Roman centurion. Jesus' encounter with this soldier illustrates how our work shapes our character and opens paths to spiritual insight.

Imagine the life of this Roman soldier. He had been around the block. After a twenty-year career traveling far and wide in the service of the world's largest and most powerful employer, he took a contracting job with a smaller group that involved a foreign posting. He was late in his career, an overseer, working in middle management. He had seen it all and wasn't easily impressed or deceived. Fools didn't last long in his profession. Although he had paid respect to the religion of his people, he knew it was just a thinly disguised worship of all-too-human men. But the religion of the locals in Jerusalem was different, and he was so drawn to the simplicity and purity of their worship of one God that he donated the money to build their house of worship. These people were tricky, however -- that was, after all, why he was working here. A lot of their teachers spent more time talking about the evil of the government than the teachings of their sacred writings. Revolutionary zealots came and went, year after year.

So he hardly noticed one year when the locals started talking about another rabbi. But when this teacher showed up right in the synagogue he had helped build, he knew this one was different -- from the first words he said. No self-serving manipulation, no silly arguments about religious trivia. And when a crazy man in the congregation had yelled at him, the teacher's reply threw him to the ground -- and when that man got up, he was, well, sane! The teacher came in and out of town a lot as he traveled through the region. So when one of this overseer's employees got sick, the tough old man knew exactly whom to contact, because he had seen that this teacher had real power and authority.

This soldier asked Jesus to heal his servant, but trusted that he could do so from a distance. This is the only such example in the gospels. The reason he gave for this trust stems from the way his work shaped how he saw the world: "For I also am a man placed under authority, with soldiers under me; and I say to this one, 'Go!' and he goes, and to another, 'Come!' and he comes, and to my slave, 'Do this!' and he does it." Jesus' response is unique: "Now when Jesus heard this, He marveled at him, and turned and said to the crowd that was following Him, ‘I say to you, not even in Israel have I found such great faith.'"

The centurion was a career soldier. Yet his work, even in a brutal environment, gave him crucial insight into how life works. Through his own experience of earthly authority he learned of God's authority: if an authority is sufficiently powerful, its commands are always carried out. His experience of power and obedience allowed him to exercise a level of faith unparalleled amongst all those who sought out Jesus during his earthly ministry.

A grinding workplace can seem to do nothing but wear away at faith. But no matter how punishing or abrasive your work environment may be, it can give you spiritual insight that others simply will never experience. Given your work among the things of this world, what insight might you gain into the things of God?

Nolan Sharp received his master's in electrical engineering from Stanford University and went to work for Hewlett-Packard. Now he is the founder and Director of Priority Associates Croatia, an outreach to professionals under the umbrella of Campus Crusade for Christ in Zagreb, Croatia.