Who Speaks for Mormons 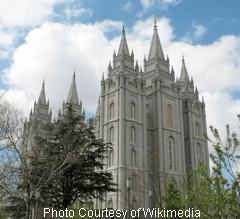 Respectful religious dialogue is becoming increasingly important as the world becomes a global village. Dialogue is critical in helping societies negotiate how to run the neighborhood in the face of inevitable conflict over politics, economics, religion, and other issues. Whether this conflict is destructive and violent or constructive and peaceful depends largely upon how world religions adapt to changes as believers from different traditions encounter each another. The tone of the conflict usually depends on the goals of each participant.

One approach I favor in religious dialogue is a respectful engagement that seeks first to understand and respect the beliefs of the other. While I believe spreading the message of my religion is important, one effective method rises from a foundation built on common ground. Morally, this approach fulfills the commandment to "do unto others." Pragmatically, it reduces the possibility of arguing past others or getting hung up on peripheral issues. One simple way to know if you understand the position of the other is by attempting to restate the position of the other to his or her satisfaction.

Significant problems remain in this approach. The beliefs of any one religion can be remarkably diverse amongst its own adherents. This is no less true for my own religion -- identifying "official Mormon doctrine" has been compared to nailing Jell-O to the wall. The idea of "doctrine" itself is difficult to pin down. Is doctrine equal to "truth"? Is doctrine something all Mormons must accept? What constitutes Mormon doctrine? In order to facilitate better communication between members of other faiths (as well as harmony among Mormons), various efforts have been made to identify a standard for Mormon doctrine1.  I'd like to further discuss a few of these efforts in order to answer the question "Who speaks for Mormons?"

Based on a Judeo-Christian outlook, Mormons believe God reveals His will to His children in order to help them return home to Him. This revelation can be given to particular individuals for themselves or to leaders for the Church as a whole. According to the founding prophet Joseph Smith, this revelation is continuing and "adapted to the circumstances in which the children of the kingdom are placed." Mormons look to written scripture and the words of living prophets and apostles for guidance in belief and practice.

However, Mormons do not believe these scriptures or prophets are perfect. Prophetic declarations reflect aspects of the culture in which they occur and can later take on new meanings in different circumstances or be overlooked altogether. The dynamism of continuing revelation makes it difficult to take a "snapshot" of Mormon belief as a whole at any given time. Different Mormons may understand LDS doctrines differently.

Joseph Smith objected to various creeds that require strict belief in officially defined doctrines, but Mormons are generally expected to agree on some fundamentals. For example, in order to be baptized, one must profess belief in Jesus Christ as Savior of the world and in prophets who help guide the LDS Church. More than intellectual doctrines, however, Mormons also rely on a community forged by ordinances and the living of a continuing sacred history as depicted in scripture. What Mormons become through righteous acts and faith in Christ is often considered more important than any specific peripheral doctrines Mormons might believe.

Mormonism is lived and experienced as much as it is believed. Moreover, various "folk" doctrines tend to spring up from time to time, some becoming generally accepted and others jettisoned along the way. As Mormonism becomes more of a global religion, official statements and publications have become narrower in scope, streamlined, and applicable to the growing diversity in the Church.

Considering these circumstances, how can Mormon doctrine be determined in order to facilitate healthy interreligious discussion?  There is still no comprehensive and official answer to this question; Mormons continue to answer the question differently. For instance, Robert Millett, a Mormon professor of religion, has described an "authoritative approach" wherein official Mormon doctrine is defined by appealing to what are considered authoritative sources like scriptures and the statements of prophets2.  Sociologist Armand Mauss described a "scale of authenticity," ranging from canonical to popular or "folk" doctrine3.  Mormon philosopher James Faulconer has argued that Mormonism is "atheological," consisting more of keeping covenants between humans and Christ rather than of various unchanging doctrinal facts.4