The Temple and "Big Love": Mormonism and American Culture 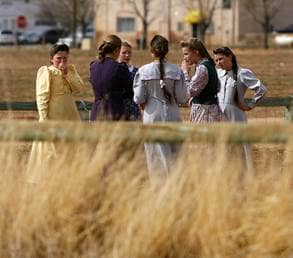 Back in early March, for perhaps the first time in history, TV Guide broke controversial news when it reported that "Big Love" would be showing a Mormon secret ritual. "Outer Darkness," Episode 3.9 of the HBO series "Big Love," showed a portion of the LDS temple ceremony - specifically, a fraction of a prayer circle and the most sensitive portion, the veil ceremony, the capstone moment of the ritual. The consequent Mormon uproar drew the battle thusly: the corrupt and decadent (and, in frequent formulation, anti-Mormon) media were mocking the holy. Email petitions, Facebook groups, and YouTube videos abounded, none of which accomplished a great deal; the episode aired on schedule, as the LDS Newsroom, the church's official public relations organization, predicted. Latter-day Saints were urged to avoid losing their collective temper.

This is not to say that the Mormon sense of violation was misplaced or unjustified. But the event reached beyond the simple narrative of the profane versus the sacred that cries of "anti-Mormon" invoked. Rather, the controversy reveals the continuing uneasiness of Mormonism's relationship to broader American culture. While "Big Love" is a watershed in Mormonism's relationship with popular culture, this particular episode shows how difficult it remains for an institutional, hierarchical church to function in the freewheeling democratic society of the United States. The Newsroom lumped what happened in this episode with the appearance of several other Mormon storylines in American popular culture -- most notably the 2007 film September Dawn -- as being critical of the church. You could also say that these very different depictions reveal how complicated the Mormon position is becoming.

The temple content aside, this was a reasonably typical "Big Love" episode. That is, it offered a soap-opera-esque story about a small family of polygamist, fundamentalist Mormons, the Henricksons (whom we like!) struggling to survive in a hostile world. There are a few spiritual inaccuracies. (In this episode, for instance, Barb declares she wants to "take her endowments," full stop, and multiple characters speak of being "unsealed;" both phrases are close to standard Mormon jargon, but off enough to sound tinny to Mormon ears.) The whole thing is set in a vaguely paranoid Salt Lake valley where the LDS Church looms behind every business deal and in every "heck." Indeed, a subplot in the episode concerns grim-faced, darkly suited men dueling Bill Henrickson over possession of a historically explosive letter. These are scenes that would not have seemed out of place in "The X-Files."

Still, "Big Love" works because the Henricksons seem so normal. They shop at Costco, their children have part-time jobs, Bill wears jeans and flannel - and so forth. By contrast, the two other versions of Mormonism on the show are presented as sinister and authoritarian. The polygamist compound that the Henricksons hold at arm's length is populated by people who dress in bib overalls and long skirts. They are ruled over by the hacking, gnarled, and vaguely unclean prophet Roman Grant, who marries children. Similarly, the LDS Church is run by smooth, insensitive, pudgy men whose motives are as threatening as Grant's, if less overtly disturbing. If Grant is a wildly demonic medieval Satan, the LDS Church is the banal evil of 20th-century institutionalism.

This is all groundbreaking in some ways, if not in others. On the one hand, "Big Love" normalizes the Mormon tradition. The spiritual experiences of the Henrickson family are never presented with anything less than sympathy; their faith in the odd doctrines that most Americans find strange -- a God with a human body, marriage in a three-tiered heaven, baptisms for the dead, the Book of Mormon, priesthood with the power to heal -- is presented as entirely sincere and plausible. The makers of "Big Love" have chosen to take Mormonism seriously.

This is a far cry from the ways that pop culture has dealt with Mormonism in the past. In September Dawn, director Christopher Cain and his band of merry pranksters wanted their viewers to think the temple was strange and pagan, so they set the endowment ritual in a barn and lit it like the Phantom of the Opera's secret lair. Cain presents Brigham Young as an authoritarian tyrant, and other characters were sympathetic or not to the degree to which they disobeyed church leadership. There is a qualitative difference between this storytelling and "Big Love." For Barb Henrickson, who wants to go to the temple because she believes it is what it claims to be, being excommunicated is devastating. She tells the others in her marriage, "I miss it. I miss the ritual and the sense of purpose." It is clear to the viewer how hallowed the temple is; indeed, Barb does not enter until midway through the episode, and viewers have been prepared to expect only good things for her there.