"It's just plain sad what the gay and lesbian movement has come to," Bob Ostertag wrote in a blog that appeared in The Huffington Post late last December. "November 4 was so extraordinary, so magical. The whole world seemed to come together. Except for gays and lesbians in California. We were supposed to feel crushed over Proposition 8. And now the whole world will celebrate the inauguration of the first black American president and the end of the George Bush insanity--the whole world except gays and lesbians who will be protesting Rick Warren's presence at the inaugural."

Ostertag--a historian, journalist and professor in the departments of Technocultural Studies and Music at the University of California, Davis--says he was unprepared for the avalanche of postings (more than 1,300) in response to his blog. But the biggest surprise to follow the publication of his essay, titled Why Gay Marriage is the Wrong Issue, was the wrath directed at him by gays and lesbians.

"One of the things that was disturbing to me was how many gay and lesbian readers wrote comments disparaging my life," Ostertag said in an interview with Patheos. In his piece, he described the constellation of relationships that sustains him: various men, each of whom he loves in a different way, a child and two moms. For him, that organic, improvisational family embodies what he sees as the non-normative, non-conforming beauty of LGBT culture as it developed from the 1960s through the 1980s.

"I was surprised how prevalent those comments were," Ostertag said. "It confirmed my decision to write that piece. I wasn't aware how this prioritizing of marriage in the gay and lesbian movement was going to mean that battles that I thought were won 20 years ago were going to have to be fought again."

Q: You weren't bothered by Rick Warren's role at the inauguration?

A: He's not Jerry Falwell-he's never made it a priority to attack gay people, transgender people. Yes he thinks homosexuality is a sin, but nowhere in his books, which sell millions of copies, does he say anything against us. It all came down to the idea that he was on the wrong side of Prop 8. Marriage has become a litmus test for the gay and lesbian movement. Not only do we think we have to oppose people who oppose gay marriage; we demand of our allies that they can't work with people who don't support gay marriage. It's so absurd.

Q: So wading into the debate about same-sex marriage wasn't really what you intended?

A: Not at all. Like a lot of other people I know, I thought this isn't really my issue. But I didn't want to rain on the parade.

Q: Is the push for marriage equality a generational thing? Do young LGBT folks care about this as much as older gays and lesbians?

A: In talking to my students, who were all quite active on Prop 8, I was surprised that a lot of them were more motivated around Prop 8 than around the presidential election. What got me was that even the most socially radical students didn't question the priority that the gay and lesbian movement was putting on marriage rights. That has achieved such a position of privilege in the gay and lesbian political agenda that for college students it has pretty much eclipsed the history of the gay movement, which was about questioning and challenging the hegemony of the institution of marriage. My students seemed completely unaware of this.

Q: What's the most important bit of that history to be recovered?

Why should people who enter into a long-term relationship get benefits that other people don't have? Why should a single mom pay more taxes than a married mom? More to the point, young people are completely unaware that in the very recent past this is not the way the gay community was structured. The kinds of relationships we built in place of institutions from which we were excluded were resilient and came through for people in the midst of the calamity of the AIDS epidemic. In that era a lot of different kinds of relationships were formed to help get us through. Very creative, very out of the mainstream relationships proved to be the most resilient in that crisis. It bothers me that that history is being lost and that young people in the movement aren't even aware that there are alternatives. 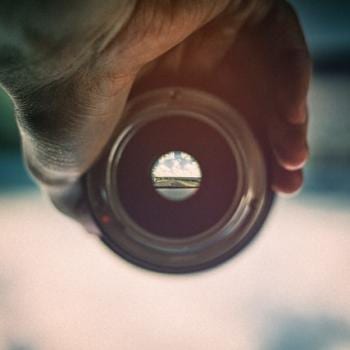 The Spectrum of Intentionality
Joey Willis
2

Evangelist: The Only Way Biden Could Be President Is If "Americans Are Idiots"
Beth Stoneburner
3

On the Holiday Bus
Mary Pezzulo
4

Gutter Journalism? You Won’t Find It Here!
John Richards
Get Patheos Newsletters
Get the latest from Patheos by signing up for our newsletters. Try our 3 most popular, or select from our huge collection of unique and thought-provoking newsletters.
From time to time you will also receive Special Offers from our partners that help us make this content free for you. You can opt out of these offers at any time.
see our full list of newsletters
Editor's picks See all columnists