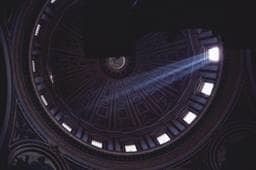 Politicians in the United States are myopic because we elect them to represent our own myopia. History will eventually reveal our subtle nationalism to be as quaint (or perverse) as the kinds of political interests of yesteryear that advocated for the interests, say, of New York in contrast to those of South Carolina, or of landowners over slaves.

On the left are those who, still experiencing the rush of postelection euphoria, expect the government to extinguish the entire nation's problems through clever social programs like health care reform. On the right are those who are convinced that the market eventually sorts everything out. There are many examples, but the common appeal is to a model of government rooted in a Jefferson or a Hamilton, a Roosevelt or a Reagan.

This week Pope Benedict XVI released a long-anticipated social encyclical, Veritas in Caritate (Truth in Love), which exposes the narrowness of much of current American political thought. Its fundamental thesis is that true human development requires an authentic vision of the human person, created by God to engage in authentic community that grows toward its fulfillment in history. In Benedict's crosshairs are primarily those whose policies have contributed to the current global economic crisis, but also those whose solutions to the crisis (which sometimes, grotesquely, border on the language of salvation) are limited precisely because they do not address the basic question of what human beings really are and how they can work together. His primary text is an earlier encyclical, Populorum Progressio (On the Development of Peoples) by Paul VI, published some forty years ago.
Is Benedict liberal or conservative, according to our categories? Decide for yourself.

The encyclical calls for:
• Societies built on justice and love (6)
• A transcendent vision of the human person to guide governments (11)


• Evangelization and work for justice (15)
• Democratic societies (21)
• Technology guided by moral reasoning (23, 68ff)
• Worldwide redistribution of wealth (32, 36-39, 42) and energy resources (49)
• Avoiding confusion of material comfort and salvation (34)
• Critique of laissez-faire economics as well as economic redistribution through politics (36)
• Recovery of a "spirit of gift" in economic decisions (37), though not through laws
• A new model for business, with people and not profits at the center (40)
• A notion of human rights that begins with the duties people owe to each other (43)
• An end to stockpiling natural resources by rich nations (49)
• Respect for human life from conception to natural death (51)
• A place for religious discourse in the public square (56)
• Access to the market for producers in poorer nations (58)
• Rich cultural dialogue and not a common technologized pseudo- culture (59)
• Tourism that does not exploit local people (61)
• Internationalization of labor unions (64)
• Increased microfinance and microcredit (65)
• Consumer responsibility to make moral choices (66)
• A real global political authority (67).

Once upon a time, James Madison, Alexander Hamilton, and John Jay published the Federalist Papers for the sake of persuading their fellow citizens to ratify the newly-penned Constitution of the United States, arguing, in essence, that a central government could more easily see to the common good of Americans than loosely confederated states.

Many were frightened of a central power then, and many are frightened of a global power now. But Benedict's encyclical highlights that it is a fantasy to assume isolation any more, while at the same time trumpeting concern for what Jesus preached. The world's economy is global, meaning that we in rich countries must ask hard questions about what to do about our patterns of consumption. Free from nationalistic concerns that preoccupy the leaders of developed nations, he represents a voice asking the truly global (the Greek word is katholikos) question: how then are we to live? His answer is straightforward: by seeking to love people through consideration of the truth -- the truth about the market, the truth about politics, and most especially the truth of the human heart yearning for God.

For more in the Faith@Work Consultation series, click here.