An Interesting and Unusual Pew Report on Mormons 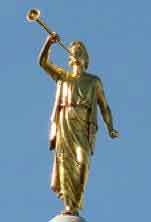 On Pioneer Day, celebrating the date the Mormon pioneers first entered the Salt Lake Valley, the Pew Research Center's Forum on Religious & Public Life released its report on Mormonism, based on responses to its 2007 Religious Landscape Survey. I was surprised that the initial coverage was so mundane, but when I read the report, so many details were fascinating! The press coverage of the report has either looked at Mormons fears about Hollywood, or the fact that Mormons are the most conservative of religious traditions. BORING! Tell me something that I didn't know already.

In fact, the report says a lot that I didn't know already. For those that don't want to read through the report, I've pulled out and listed below a lot of the results that I found particularly interesting or unexpected:

Religious Beliefs and Practices
• Mormons are more certain about their beliefs. We're the only religious tradition to have 100% claim to believe in God. 90% of Mormons say they absolutely believe in God (the rest believe, but are less certain). This same pattern appeared in questions about life after death and miracles.
• Most Mormons don't believe in a literal interpretation of the Bible. 57% don't, versus 35% who do believe in a literal interpretation. In comparison, of those in the general population of the U.S. who believe the Bible to be the word of God, more than half take it literally.
• Home and religious schooling are less likely among Mormons. In U.S. 15% of the general population either home school or send their children to religious schools. Among Mormons, just 6% do.
• Missionary efforts are less frequent, but more likely among Mormons. We are far behind groups like the Jehovah's Witnesses when it comes to how many Mormons try to share the gospel weekly. But only 24% never try to share the gospel. Among Mormons, Utahns are less likely to share the gospel than those who live elsewhere.
• Mormons retain converts as good or better than most. 70% of those who grew up Mormon stay in the Church. Half of those who leave, convert to another religion; the rest end up with no religion.
• Mormons are most likely to believe that religion solves problems. Just 3% completely agree with the statement "religion causes more problems than it solves," less than any other religious tradition.
• More education leads to stronger belief among Mormons. This is the opposite of the general population of the U.S.
• The unmarried are less faithful among Mormons. Those who are not married are less likely to say they attend Church weekly or pray regularly, and they are less likely to believe that religion is important.

Social and Political Views
• Significantly fewer Mormons are Republican outside of the West. In Utah 69% of Mormons affiliate with the Republican party or lean Republican. Outside of the West, just 55% is Republican.
• Mormons are less strident about abortion than Evangelicals. Following the Church's lead, members say abortion should be illegal in most, but not all cases. Just 9% want it outlawed all the time, versus 25% of Evangelicals.
• Mormons are strongly anti-evolution. 75% said evolution is not the best explanation for human life. I find this odd because from what I've seen the Church's statements have focused on the fact that God is behind the creation of man, not how God did it.
• Mormons are evenly split on Church involvement in politics. Again, the Church's position seems pretty clear - it can get involved whenever it thinks it should. Statements at election time are not about the Church's position on issues, but reminders that the LDS Church does not endorse individual candidates or political parties. I should also note that this survey was taken in 2007, before the Proposition 8 battle.
• Mormons support stricter environmental laws. 55% believe such laws are necessary despite the cost.
• Mormons are not isolationist. A majority says the U.S. should be active in world affairs, the opposite of the U.S. population as a whole.
• Mormons favor diplomacy over military strength. Half say diplomacy works better, and 37% say military strength is more important.

Methodology
I should note that the Pew report seems like it was well done. They surveyed more than 35,000 in the U.S. to get their results, and ended up with 581 who identified as Mormon. But that includes some members of the Community of Christ (formerly the RLDS Church) and various fundamentalist and other non-LDS groups. The report says these are just 4%, or 21-25 of the 581 Mormons.

Kent Larsen is a BYU graduate who lives in New York, where he owns and runs the book importer and publisher, Luso-Brazilian Books, and tries to publish LDS books as well.