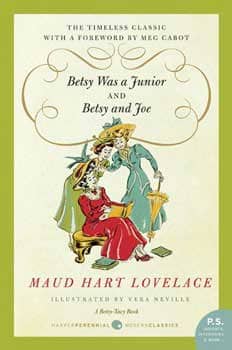 Meg Cabot, author of over 60 novels for teens and adults, including the popular Princess Diaries, was in Mankato, Minnesota last week where she gave a lively talk at the Betsy-Tacy Convention about the influence of the Betsy-Tacy books on her life and writing. HarperCollins will reissue the last six books in the series in October, featuring the gorgeous original covers by Vera Neville and forwards by Cabot, Anna Quindlen, and Laura Lippman.

I read these books over and over again as a child. Raised in an agnostic household, I learned about magic and mythology from such writers as E. Nesbit, George MacDonald, and Roald Dahl. But I learned about religion from Betsy, and the amazing Bob Ray, Betsy's father.

Many of the books in the series have something special to say about religion. The fifth book, Heaven to Betsy, takes on the question of religious conversion in a thoughtful and upbeat manner. Heaven to Betsy chronicles Betsy Ray's freshman year in high school. The year is 1906, and the place is Deep Valley, Minnesota (based on the real-life Mankato). Many things in Betsy's world are changing. The Ray family has moved to a new house, Tib has moved to Minneapolis, and Betsy and Tacy are starting high school and making new friends. They are beginning to leave childhood behind to become young women.

On Christmas Day, the Rays go to church in two different parties. Betsy and older sister Julia have begun singing in the choir at St. John's Episcopal Church, while Mr. and Mrs. Ray attend the Baptist Church with youngest daughter Margaret. Mr. and Mrs. Ray don't know it yet, but that's how it'll be from now on. Betsy and Julia have decided to become Episcopalians.

The girls are nervous about breaking family tradition, and they find a suitable afternoon to discuss their decision with their father. The talk takes place in Chapter 23 of Heaven to Betsy. At first Bob jokes with them, but Betsy breaks the ice. "Papa, don't joke. Julia and I know that you'll feel terrible. In the first place it will be so embarrassing to you; you're a prominent Baptist."

Hearing Betsy say this, Bob Ray grows very serious. He tells the girls, "You might as well learn right now, you two, that the poorest guide you can have in life is what people will say." The important thing is not "what church you want to join but whether you want to join a church at all…I'm glad to discover that you've given some thought to religion. It's a right thing to do when you begin to grow up."

He tells them about the responsibilities of belonging to a church. He talks about regular attendance and supporting the church with both money and labor, in moderation, of course. Then he delivers a powerful piece of wisdom:

"The most important part of religion isn't in any church. It's down in your own heart. Religion is in your thoughts, and in the way you act from day to day, in the way you treat other people. It's honesty, and unselfishness, and kindness. Especially kindness."

In choosing a religion of their own, Betsy and Julia express their growing sense of self as maturing young women. In accepting and supporting their choice, Bob Ray gives them wise insights that will enrich their whole lives. The guidelines that Bob gives them are profound, yet -- and this is more important -- simple. Be brave, be kind, and be honest. Be unselfish. In the tale of Betsy's and Julia's conversions, Lovelace gives us a warm and positive story about religion and family. It's a story of respect, support, and integrity, of independence, love, wisdom, and responsibility. These are incredible things to teach a young reader about religion!

I don't know how much these books influenced my own decision to become an Episcopalian. When I did, it had been a few years since I'd read about Betsy Ray. But I do know how much these books influenced me to strive to be honest, unselfish, and kind. As Meg Cabot said in Mankato last week, these books are timeless, and among the best American teen fiction ever published. Be sure to get your own copies in October, and read them with the young readers in your life.

1. What teen books do you read over and over? Which ones have you read with the young readers in your life?
2. Did you read any books as a child that influenced your beliefs or your opinions about religion? Would you recommend them now?

Join in the discussion here.