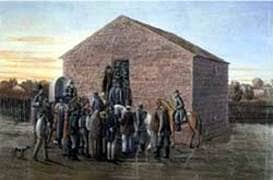 Here, canonized scripture consists of (extracts of) inspired letters, as with the letters of Peter and Paul in the New Testament and parts of Ezekiel and Daniel in the Old Testament. The letters were first published in abbreviated form in the Times and Seasons and then in full in the Millennial Star. They can be read today in the History of the Church, 3:289-305.

These portions of letters Joseph Smith wrote from Liberty Jail in March of 1839 were first included in the 1876 edition of the D&C. According to Robert Woodford's dissertation on the D&C, there is no extant record of the criteria used "to determine which portions of these letters were to be included in the D&C, but it is known that Orson Pratt worked on this edition of the D&C under the direction of President Brigham Young." (1567)

Other lesson ideas and blog discussions: