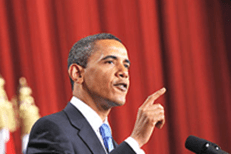 When President Barack Obama said he wanted to address women's rights during his speech to Muslims, I said a prayer to the God of the Torah, the Bible and the Quran: please don't let him fall into the trap of headscarves and hymens.

The conversation about Muslim women too often revolves around what's on our heads and what's between our legs. My hopes were high that Obama -- surrounded by powerful women at home and work -- would avoid that pitfall of too many Muslims and non-Muslims alike.

Confession: I'm utterly under Obama's charm, which worries this woman from the Middle East, where we've had our share of charismatic men with disarming oratory skills. I check that charm with higher expectations of this entirely different creature of president: cosmopolitan, has lived abroad, has family all over the globe. I know Obama knows better than George W. Bush.

Which is why I was distraught that Obama had such low expectations for Muslim women. The 13 or so lines dedicated to us focused on headscarves and education, a bland and stereotypical view of Muslim women that ignored the courageous creativity of so many fighting against misogyny and male-dominated interpretations of my religion.

I met many such women -- some in headscarves, many not -- in Kuala Lumpur earlier this year at the launch of Musawah, a global movement for justice and equality in the Muslim family. Panel discussions and dinner talk among the 250 activists and scholars from 47 countries were heated, but not about headscarves or education.

We had much heavier issues on our minds -- like a woman's right to initiate divorce, how to protect women against clerics who say Islam gives a husband the right to beat his wife, fighting forced marriage. In other words, wrestling Islam back from the men who use it against us.

And the conversation will continue when I return to Kuala Lumpur in July for the second gathering of WISE -- Women's Islamic Initiative in Spirituality and Equity -- which has on its agenda the launch the first global Muslim women's consultative council (think of a group of women ready to issue fatwas or religious edicts) as a way of acknowledging Muslim women's hunger for religious authority.

As Muslim women, we're not waiting for the president of the United States to open doors for us or to fight our fights. The Bush administration and its "we'll liberate you by invading your countries" doctrine is thankfully behind us. It is up to us to fight for our rights inside our communities.

But there are several ways the president of the United States can help. He can listen to the diverse voices of Muslim women and not just the most conservative interpretation of Islam that some hear out of misguided "cultural sensitivity."

It is not culturally sensitive for example to stay silent when an eight-year-old girl is forced into marriage as was reported from Saudi Arabia last year. It is criminally unjust. It is invariably men who define "culture" and invariably women and girls who bear its brunt.

By seeing our diversity, the president of the United States can avoid the headscarf conundrum. I'm glad he avoided hymens and it was good to hear Obama make clear to his Muslim audience that the U.S. government had gone to court to protect Muslim women's right to wear headscarves. Surely it should be about choice.

So why not support choice for women everywhere, even in Muslim-majority countries? Here's where it gets complicated and confusing. In Egypt, which played host to Obama's speech, women have gone to court and lost in their fight for their right to wear headscarves as anchors on state-run television channels and as flight attendants on state-owned Egypt Air.

In Saudi Arabia, Obama's first port of call during last week's trip, girls and women have no choice but to cover up or suffer the cruelty of the morality police who in 2002 barred girls from fleeing their burning school building because they weren't wearing headscarves. Fifteen girls burned to death.

In Muslim-majority Turkey -- the first Muslim country Obama visited since taking office -- women are barred from wearing headscarves on state-run university campuses and in government buildings.

When it comes to education, surely the most basic right for girls and women everywhere, again it's complicated. In Saudi Arabia -- recognized as one of the worst violators of women's rights -- women outnumber men on university campuses and yet are treated like minors who need a male guardian's permission to do the most basic things.