The point is, ladies and gentleman, that greed, for lack of a better word, is good. Greed is right, greed works. Greed clarifies, cuts through, and captures the essence of the evolutionary spirit. Greed, in all of its forms; greed for life, for money, for love, knowledge has marked the upward surge of mankind. And greed, you mark my words, will not only save Teldar Paper, but that other malfunctioning corporation called the USA. Thank you very much.

Sounds almost like a religious scripture, doesn't it? The 1987 movie Wall Street, starring Michael Douglas and Charlie Sheen, was memorable for its line "Greed is good"; Michael Douglas' character, Gordon Gekko, personified all that greed could attain ... and corrupt.

Our question this week poses a different inflection on that statement, and asks "Is Greed Good?" Is greed necessary to uphold the global system of financial markets, philanthropy, and trade that has become unstable and unreliable in the last year, or is it a temptation that keeps people away from true spirituality and values?

In a world of government bailouts, failing corporations, Ponzi schemes, and home foreclosures, perhaps it is easy to say that greed is the root cause of the global financial bust. No one believed that the financial markets would fail so miserably, or that the reckoning would come so soon. Yet lest anyone think that this bust broke the cycle, just this past week Goldman Sachs posted nearly a $3.5 billion quarterly profit, despite the fact that they received a government bailout. Now, the firm will seek to reward their remaining employees with larger bonuses. All of this could make you think that Gordon Gekko is a prophet after all ... though a celluloid one.

Yet during the financial boom, poverty remained and it continues to remain ever present. In the Christian scriptures, Jesus says, "The poor you will have with you always" (Mt. 26:11; Mk. 14:7). In some religious traditions, the impoverished are afforded an important place within the echelons of religious life, their lives held up as spiritual exemplars.

So then, is greed necessary to maintain a balance between the spiritual realms of good and evil, wealth and poverty? Is greed the yin to poverty's yang? Or is it something more? And what constitutes greed? Is greed the pursuit of making money at any cost, or desiring more than what one is able to afford? If one is already wealthy, is it greedy to want more, even if more means being able to give more to those in need? These are valid questions that strike at the core of most spiritual, religious, and social questions surrounding the pursuit of financial gain, and what it should be used for.

As background to these Public Square articles, it is perhaps important to consider that in the western context, one book that has framed the conversation about "greed" is Max Weber's The Protestant Ethic and the Spirit of Capitalism, published in 1934. Weber asserted that capitalism stemmed in part from the Calvinist ethic of hard work inherent in the lives of such groups as the Puritans. The pursuits and habits that surrounded the Puritans favored the "rational" pursuit of economic gain. Greed, for Weber, was not a rational pursuit; rather, greed was rooted in the idea of profit for minimum effort. Greed, according to Weber, was not a component of capitalism. As he wrote, "Unlimited Greed for Gain, is not in the least identical to capitalism, and is still less its spirit. Capitalism may even be identical with restraint, or at least a rational tempering of this irrational impulse."

For Weber, capitalism held moral underpinnings, and religion was the motor that drove capitalism, not the other way around. Capitalism could not be bad, because it held within it certain moral dispositions that were deemed to be good in the culture of the West -- rationality and restraint. Hard work, then, would be rewarded with money.

Despite the fact that Weber's consideration was only about Christianity, comparisons were made with other religious traditions with this thesis, and Weber's thesis itself has been critiqued and written about ad infinitum. It would be hard today, I suspect, for Weber to talk about his thesis with a straight face. Suffice it to say that the markets, greedy for more profits, were certainly overworked to the point that the entrance of derivatives and the selling off of bad loans over and over again was "work," but a work that would come to imperil many.

Church Will Never Be the Same Again... And Wow That's a Good Thing
Clint Schnekloth
2

How To Be A Better Person
Anne Kennedy
3 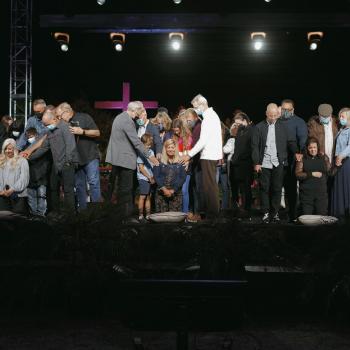 Bishops Move to Excommunicate the Prez. Somewhere Jack Chick is Saying I Told...
Rebecca Hamilton
Get Patheos Newsletters
Get the latest from Patheos by signing up for our newsletters. Try our 3 most popular, or select from our huge collection of unique and thought-provoking newsletters.
From time to time you will also receive Special Offers from our partners that help us make this content free for you. You can opt out of these offers at any time.
see our full list of newsletters
Editor's picks See all columnists