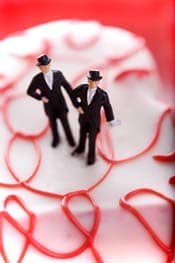 Immediately following the November 2008 presidential election, two stories with tremendous significance dominated the news: Barack Obama's election as the first African-American president and California's passing of Proposition 8, which eliminated the right of same-sex couples to marry in that state. While the former was cause for national celebration and commemoration, Prop 8 stirred up feelings of anger, confusion and, for some, victory. Reports of how certain religious organizations - and particularly the Mormon Church - mobilized people to support the ballot initiative triggered a backlash from Prop 8 opponents across the country, reinvigorating the debate over the relationship between faith, politics and same-sex marriage.

While news media reports tend to cast the issue of same-sex marriage in stark and sometimes simplistic terms, the viewpoints of individuals with a stake in the issue are sometimes not so black-and-white. And as more states become politically invested in the debate, more people are being directly affected by it. A month before the 2008 election, the state of Connecticut passed legislation legalizing same-sex marriage, and in April 2009, Iowa and Vermont added themselves to the list. Shortly after that, New York's governor David Paterson announced that he would introduce a bill to legalize same-sex marriage in his state. Although the public will not have the opportunity to vote directly on the issue in New York, distinguishing their experience from the situation in California, they nonetheless offer a wide range of earnest opinions.

"Personally, I have a hard time," says Matt Dunbar, a 28-year-old self-described conservative evangelical Christian. "I have gay friends and I support them personally, but I'm still on the fence about whether gay marriage is moral or not. It's pretty straightforward in the Bible. But at the same time I understand the contextual aspects."

Many other theologically conservative people Dunbar's age also accept, or at least tolerate, homosexuality. Unlike their parents or older pastors, they've been exposed to gay culture and they likely have gay friends, or at least know someone who is gay. A pre-2008-election survey examining the faith and political views of younger people supports this idea by finding that even among evangelicals and Catholics - religious groups traditionally opposed to same-sex marriage - younger people tend to be more favorably disposed toward it. Identifying this group as the generation who grew up with shows like "Will and Grace" and "Queer Eye for the Straight Guy," Elna Baker, a young writer and practicing Mormon living in New York City, puts it simply: "You can't ignore the fact that we are affected by the culture in which we are raised."

This is not to say that religiously inclined people of this younger generation necessarily view homosexuality as moral. For example, Reina Alvarez, a born-again Christian, says that while she's not "against" her gay family member and friends because she is supposed to "love everybody and can't shun the homosexual," she nevertheless still refers to them as confused sinners who can be "delivered from homosexuality." Love the sinner, hate the sin. Still, in her acknowledgment of the ambiguity of the situation, she, along with Dunbar and Baker, all personify the general trend among younger, religiously conservative people toward a greater acceptance of gay and lesbian people in their immediate social circles.

Once the issue of homosexuality enters the political realm in the form of same-sex marriage, it becomes somewhat less complicated for young conservatives, though they tend not to feel the kind of crusading ardor around the issue that has motivated the older generations within their religions. "A lot of younger people are disengaged with this issue because it's not as important as the rest of the things -- like poverty, AIDS, Katrina, and the environment -- that this country is facing," Dunbar, a Californian living in New York City, says. "At the same time, there are a lot of young people, those same young people, when they're faced with an amendment and going to the voting booth, they're still faced with the choice of yay or nay. Most are going to go the conservative route if they're conservative. But they're not going to go out campaigning against it."

The same political tepidness toward issues connected to sexuality is also true of younger, non-religious opponents of same-sex marriage. Maya R., who was raised Catholic but says she doesn't see her upbringing as an influence on her conservative political views, thinks that same-sex marriage makes a mockery of the sanctity of marriage. She says she'd be okay with civil unions -- "I have nothing against gays, just gay marriage," she says -- but doesn't see a reason for marriage if the partners cannot have a biological child together. And although she was "really bothered" by the outcome of the 2008 presidential election and was proud that she exercised her right to vote "even in such a liberal place like New York," Maya has no desire to actively participate politically. "I don't really care when it comes to abortion or gay rights," she says. "But people do spend their whole lives fighting against it. It's not really a passion of mine because it doesn't really affect me."