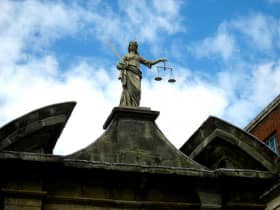 In 2000, South Korea's Maritime Affairs and Fisheries Ministry began to use a new tool to determine the quality of imported seafood: metal detectors.  Chinese fishermen had taken to packing their fish with lead pellets in order to make them heavier and more expensive.  In its first week in use in Pusan and Inchon, the metal detectors found 13,225 pounds of blowfish were packed with almost 500 pounds of lead, while 200 pounds of lead had been put into 18,450 pounds of blue crab.

When I read this story, I couldn't help but think of Proverbs 11:1 -- "The LORD abhors dishonest scales, but accurate weights are his delight."  Surely, someone in China had thought they were getting away with something and lining their pockets with extra money.  I don't know how long this had been going on, but surely the South Koreans were none too pleased.

The Lord doesn't like dishonesty in business any more than He likes dishonesty in any other human endeavor.  God knows the truth.  Whom are we trying to fool?  We certainly can't fool Him.  But we can fool others - our customers, even those closest to us.  Consider Bernard Madoff, whose sons learned that he had thieved billions of dollars from countless charities.  When dishonesty is discovered, a horrible price is paid, a price sometimes too heavy to bear.  When Christians are discovered in dishonest business, then the price paid is not merely a material one.  The witness of Christ is harmed in the world.

The scales mentioned in the Book of Proverbs were used in weighing out goods for which someone was to be charged.  They were used in a business transaction to determine fair receipt for a fair price.

So does God care about honesty in business?  Absolutely.

What are some possible examples of "dishonest scales" today?  Selling something to your customers that you know won't meet their need, or charging exorbitant costs for products of little worth.  Price gouging.  Promising things you can't deliver in order to get an order.  Playing financial games with the spreadsheet to make a company look like a better investment or acquisition than it really is.  Eating that apple in the grocery store and not paying for it.

But it goes beyond the level of corporations to the level of individuals. After all, it isn't corporations that juggle the books, it is some one individual who juggles the books, knowingly, willingly, deceitfully.  And it is an employee who overstates their expenses, or logs overtime that they never worked, who is also using "dishonest scales."

Are you using honest scales in your business dealings?  God cares about how you transact your business and how you do your work.  It matters a lot.  Resolve, by God's grace, that you will work in such a way that you can go to sleep at night with a clear conscience, and so that you would be pleased to have God inspect every detail of your work day.

Before becoming a pastor, Galen C. Dalrymple worked for many years for a computer company in the San Francisco Bay Area.  Now he is pastor of Vineyard Hills Christian Church, a non-denominational Evangelical church in the wine country of California.  His daily meditations, Daybreaks, are received by readers all over the country, and several will be featured during the Faith@Work Consultation.