Ministry and the Sacrament of Marriage For All 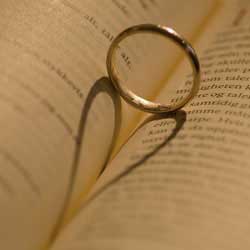 Many years ago I was interviewed by a church in Texas. Since I was a lifelong resident of the S.F. Bay Area, it seemed a bit of a stretch, but apparently I’d been recommended to the bishop who had passed my name on to the search committee. Two representatives came to my small congregation in the hills of East Oakland, noted for being racially integrated. As is usual, my wife and I were hosted for dinner at a lovely restaurant while the “get-to-know-you” phase of the process took place.

One member of the team was an older woman who seemed very open; the other, a younger, rather earnest young man who, just as dessert was served, asked how many homosexual priests there were in my diocese. “I don’t know,” I replied, wondering where he was going, “but quite a few.” “But, how many?” he persisted. And then, after another equivocal reply that included “Some of the best clergy I know are gay,” he asked, “What do you think about it?” His tone made it clear what he thought, so I offered, as clearly and calmly as I could, “I think God cares more about how we treat each other than about how, or with whom, we reach orgasm.” My wife -- quietly, gracefully, but clearly -- choked on her chocolate torte. That was the end of our interview. The next day the two came to worship, but I noticed the young man kneeling, head down in prayer, throughout the entire service, sermon included.

The Episcopal Church recently addressed homosexual orientation more openly and publicly than we’re used to. For General Convention to say that God “has called and may call” gay and lesbian persons “to any ordained ministry in the Episcopal Church” is to pull back the veil on the denial of homosexuality as a naturally occurring variation in human populations and on the shame, fear, and secrecy that denial makes inevitable.

Resolution D025 uses the theological term “recognize” to describe the aim of the listening process by which the Church has become publicly aware over the past four decades that its membership “includes same-sex couples living in lifelong committed relationships ‘characterized by fidelity, monogamy, mutual affection and respect, careful, honest communication, and the holy love which enables those in such relationships to see in each other the image of God’” (invoking a resolution of 2000).

That this process of “recognition” has been painfully deliberate is not lost on gay and lesbian Episcopalians. Although an increasing number of jurisdictions have made same-sex covenants legal, it will remain at least another three years before even “trial use” liturgical rites can be adopted officially by the Church. However, Resolution C056 “allows bishops, particularly those in dioceses . . . where same gender marriage, civil unions, or domestic partnerships are legal, to provide a generous pastoral response to meet the needs of members of this Church.” Such generosity has always characterized the ongoing process of discernment in the Church.

So while it cannot be said that the Episcopal Church has authorized same-sex “blessings” by officially adding such rites to the Book of Common Prayer (BCP) or even to the Book of Occasional Services, its request that theological and liturgical resources be gathered for such blessings has set a course to do so. And by calling for “generous pastoral response” it has allowed, for the first time, a bishop to openly and publicly permit such blessings to take place within his or her diocese.

Here, unfortunately, the term “blessing” can add to the hurt, since the question of “marriage” for homosexual couples has not been addressed. It’s as if we’re saying to one group, “here is our Prayer Book service for Celebration and Blessing of Marriage,” and to the other, “here is a generous pastoral response.” The same structural resentment operates in the legal debates about “marriage” versus “union,” where politicians want to claim that it’s the Church’s job to “marry” while the government recognizes legal unions.

What reflection has been done about marriage and blessing in the Church, which will go into high gear over the next three years, has seen the role of the Church as that of “blessing” an already existing union, whether hetero or homosexual. Because ordained clergy are deputized to perform legal marriages in the United States, there is some confusion in the culture about marriage and church. Some have insisted that clergy stop performing “marriages” and do only “blessings” since that is what is uniquely related to Christ and the church in the context of a wedding. This would mean going to a “justice of the peace” for the legal transaction and to a church for its blessing on the marriage.

In the Episcopal Church our view has been shaped by the baptismal ecclesiology embedded in the Book of Common Prayer. I’ve come to understand the sacraments as occasions for the renewal of baptism. Thus marriage is a reaffirmation of baptism within the context of a vocation to the life and ministry of a covenant relationship: hence the vows of marriage, the Eucharistic setting for the rite with prayers of the people, the final blessing, and even the “kiss of peace,” a vestige of the Eucharistic liturgy typically placed at the end of the service.

Indeed, all of the sacraments of the Church can be referred for their significance and meaning to baptism. In the past this was obscured by the habits of “Christendom:” private baptism, the confusion of confirmation with a rite of passage to adulthood in Anglo-American society, the infrequency of Communion, the fact that marriage was celebrated more as a social event than as a Church rite, and the clericalism that held the church in captivity until the 1979 Prayer Book reform.

Without the cultural liberation in baptismal perspective of this reform there would be no way the Church could see the “blessedness” of the relationships of its own homosexual members, because all human cultures are essentially homophobic. This is why the most radical change concurrent with BCP reform is the ordination of women. If, as the Prayer Book has it, “baptism is full and complete” initiation into Christ, then all the baptized are qualified to be called to the other ministries of the Church. If we are a “church of the baptized,” rather than of the bishops or clergy, or of socially privileged and dominant men, an understanding confirmed by the ordination of women, then there is no theological justification for banning from any of the sacraments any other group, however they may have been disqualified in times past.

So given (or assuming) that homosexuality is a naturally occurring variation throughout the human population, there can be no more theological reason for withholding the sacrament of marriage from same-sex partners. What remains is for the Church to reflect on the nature of marriage as a vocation beyond procreation, as a sacrament that has the purpose like all other sacraments of invoking and embodying the reign of God. So the language of the marriage rite must be expanded and eschatological tropes broadened beyond fertility, the union of opposites, and “bride of Christ” imagery.

Jim is in his fifteenth year as Rector of St. Stephen’s Episcopal Church, Belvedere-Tiburon in Marin County, CA. A native San Franciscan, Jim graduated from Yale College and the Berkley Divinity School at Yale where he was a Trustee and now serves on the National Advisory Council. He has served churches in Silicone Valley and the East Bay and was rector of St. Cuthbert’s, Oakland. He has also served as Director of Field Education at the Church Divinity School of the Pacific in Berkeley, CA. Jim is active in Cursillo and in Kairos Prison ministry at San Quentin, tutors with Bridge the Gap Tutoring in Marin City, and enjoys square dancing with his wife. Jim and Janet have three children. He is also the father of two grown daughters and has four grandchildren.