Prayers for the Ninth of Av

The three weeks of mourning are coming and the 9th of Av. For the 9th of Av, we read Eicha and we add a paragraph to the Mincha Amidah Bonay Yerushalayim that tugs at our heart-strings and puts us in a mindset of a bygone era when Jerusalem lay in ruins and we were victimized. Reb Zalman offers an alternative to this paragraph you will find below in Hebrew and English and he explains:

"Jerusalem is not the tragic heap of rubble strewn with corpses described in the Nachem prayer of the Minchah Amidah of Tishah b'av. I also do not think that it is yet the time to recite the Hallel that would befit the Mashiach's birthday celebration."

He has found a middle place. Stay open to the possibility of common ground. Use this period as a time for inner work of repair and moving our world upward toward redemption, ken y'hi ratzon bimhera v'yameinu, amein.

Comfort, Yah our God, those who mourn Your sacred House; those who feel their own losses and the lost lives of their loved ones; those who live in Jerusalem, promised to be the City of Peace, the beginning of the total redemption. Although the Holy City is now in the hands of Israel, there is fear of violent attack in the hearts of her inhabitants. While other nations have yet to consent to her integrity, we Jews have yet to learn to live in peace with each other, with our neighbors and with other religions and peoples who claim their share in her.

Comfort us, Yah, Great God, awesome One, with that holy vision of the House of Prayer for all Peoples. Place into our hearts, feelings of respect and kinship of each people and creed for its counterpart. May we all become aware that we are Your creation and that Your Glory is exalted through diverse hymns which form harmonies to the Anthem of the Sabbath. May it be granted us that anyone entering the gates of the Holy City be fully comforted, doubly consoled!

We praise You Yah, Who, while consoling Zion, builds Jerusalem! AMEN!

"I vividly remember the Ninth of Av after Jerusalem was reunited (5727/1967). I was at an Orthodox synagogue. The Rabbi was a friend and colleague. After leading the congregation in the Ma'ariv / evening prayer, and after the reading of Eychah / Book of Lamentations, he announced he was now going home to celebrate with a festive dinner in honor of the shift that had taken place.

"Since that time, I have again visited Jerusalem, the city which in Arabic is called Al Quds / the Holy One. It is not the tragic heap of rubble strewn with corpses described in the Nachem prayer of the Minchah Amidah of Tishah b'av.

"It seemed so incongruous to recite that text which you can look up in any traditional Siddur. I also did not think that it was yet the time to recite the Hallel that would befit the Mashiach's birthday celebration, so here is a version that seems right to me, and I invite you to share it with me on Tish'ah b'av."

"The ‘Dirge for Auschwitz' is the English version of a more extensive Hebrew one which was published in the Shoah issue of Tikkun Magazine (Vol 2, No 1) and then republished in Paradigm Shift. It can be chanted to the melody of Eli Tziyon of the Tish'ah b'av evening service."

Zalman Schachter-Shalomi, better known as "Reb Zalman," was born in Zholkiew, Poland, in 1924. Raised largely in Vienna, his family was forced to flee the Nazi oppression in 1938. After almost three years without roots, they finally landed in New York City in 1941, settling in Brooklyn, where young Zalman enrolled in the yeshiva of the Lubavitcher Hasidim. He was ordained by Lubavitch in 1947. He later received his Master of Arts degree in the Psychology of Religion in 1956 from Boston University and a Doctor of Hebrew Letters degree from Hebrew Union College in 1968.

He taught at the University of Manitoba, Canada, from 1956 to 1975 and was Professor of Jewish Mysticism and Psychology of Religion at Temple University until his early retirement in 1987, when he was named professor emeritus. In 1995, he accepted the World Wisdom Chair at Naropa University in Boulder, Colorado, officially retiring from that post in 2004. 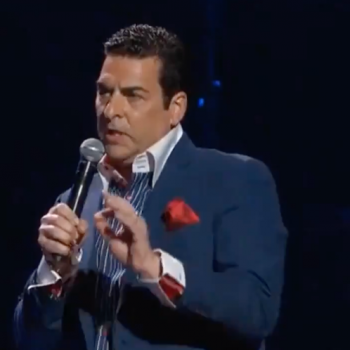 Hillsong and Scandals--- The Founder Speaks Out
Ben Witherington
Get Patheos Newsletters
Get the latest from Patheos by signing up for our newsletters. Try our 3 most popular, or select from our huge collection of unique and thought-provoking newsletters.
From time to time you will also receive Special Offers from our partners that help us make this content free for you. You can opt out of these offers at any time.
see our full list of newsletters
Editor's picks See all columnists