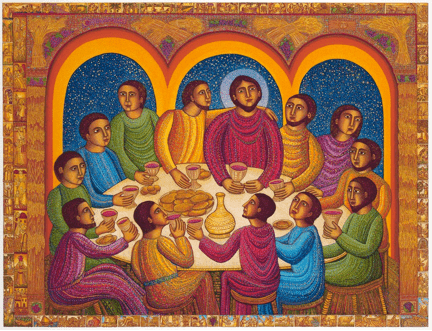 Los Angeles painter and independent printmaker John August Swanson never intended to be an artist.  But forty-one years after starting an art class from Sister Mary Corita Kent and simply doing what interested him, Mr. Swanson has become a talented, respected artist whose works capture the mysterious interplay of everyday existence and spiritual transformation.  Mr. Swanson's art is found in many permanent collections such as the National Museum of American Art, the Art Institute of Chicago, the Tate Gallery, London, and the Bibliotheque Nationale in Paris.  His painting The Procession was selected for the Vatican Museum's Collection of Modern Religious Art.  Mr. Swanson's work can be seen at www.johnaugustswanson.com.

I called Mr. Swanson at his Los Angeles home, and before I had a chance to ask John a question, he was already talking about art.

Swanson: When I think about art, I don't go with the idea that art is just for art's sake. I think art carries our stories, our history, and moves us into the future.  Art is like the Jewish tradition of Midrash -- it keeps opening things up again and again and again.  It's like my recent painting, The Last Supper.  It's not a traditional approach and it includes scenes depicted in Matthew's Gospel, chapter 25, showing the common people working, making bread, etc.  It places the Last Supper in the context of community, just as our lives are lived within community.

Swanson: My work is simple.  A New York art critic said I hadn't changed at all in forty years, but I don't want to change every two or three years to try a new technique or follow a development in the art world.  I stay focused on what interests me, the stories we live in, the communities we are a part of.

Mooney: Your work doesn't look simple to me.

Swanson: I love working with prints.  It's the democratization of my art, making it available to many.  My painting, The Procession, now in the Vatican, took fourteen months to make (1980-1982) and the serigraph took about a year to produce using eighty-nine different layers of colors.  My serigraphs are creative works themselves, changing slightly from the original work.  The layers of color I apply and the redrawing I do build up in the print to create something unique.  It's like a writer taking an old manuscript and reworking it; it's the same work but really different.  The prints make my work available to many, involve the community, and afford a way to make a living.

Mooney: Your website mentions the influence of Sister Corita Kent.  What impact did she have on you and your art?

Swanson: I don't have an art or academic background, and when I started I really didn't know what I was doing.  I took a class from Sister Mary Corita.  During the day the classes were only for women, but at night they would allow men to attend.  It took me a long time before I could accept myself as an artist.  At thirty I had no ability to make decisions, and I feared I might become someone who lived on the streets.  If Sister Corita had not said to me that I could keep coming to her art classes I don't think I would have made it.

I've been doing this for forty-one years, and it was just project by project, and only by looking back can I see that I was on a path.  Because I had no training, I was not secure or knowledgeable about art, so art came as a gift to me.  I'm grateful to God the gift came, but it's not like God spoke in an audible voice.  It has been a very mysterious process; I can't explain it.  Each time I chose a color, or made a decision about a project I was working on, it helped me grow incrementally as a person, as a spiritual person.

This gift of art was a way of healing me a little bit at a time.  And one of the most wonderful things for me is when people find that my art has a healing influence on their life and helps them become a person.  When I give lectures about my art, I am quite vulnerable, show early drawings, and talk about my struggles as a young man.  I find that it inspires people to know that they, too, can overcome their own struggles and self-doubts.  That's very satisfying and important to me.

Mooney: Earlier you said you have difficulty with art for art's sake, but in the article you wrote, "My Work is My Most Social Act," you quoted these words from the Bhagavad-Gita, "Work for the sake of work alone -- with your heart fixed on God -- and without attachment to the rewards of the work."  Is that not another way of saying, do art for art's sake alone?

Swanson:  That's a good question.  It's a paradox I think.  When we look to art for ego alone, separate and apart from community, we lose something.  The whole point of a gift -- and I think art is a gift -- is that it's shared with the community; it's not for the person alone.  The key point is keeping the eye on God, which always has a communal aspect to it; it's different than doing it just for the self.

Mooney: You have been deeply formed by the Catholic faith and its traditions.  How do you understand yourself as an artist and a spiritual person?

Swanson: I come from a faith that has a rich and broad tradition of thinkers.  It's a very complex thing.  Some people assume that if you are Catholic you have left your brain behind, but that is such a simple view of this very rich tradition.  I have read from many Catholic sources and I try to tap into all of these wonderful thinkers who challenge us to move toward justice, peace, and transformation.  I'm not just a painter.  I'm not someone who just sits in the pew and prays the rosary.  I'm in the world, trying to help us become more human.  I don't want to be labeled a "Christian Artist" so much as I want to do good work.  I love my faith, but I'm happy when anyone, of any faith or no faith, is inspired by my work.  I'm just hoping my art helps others become more compassionate, care about others, and be involved in the world.