Sermons For A New World

By the Rev. George Anastos 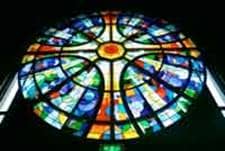 Sermon Title: An Urgent Prayer for This Age
By the Rev. George Anastos
Preached at First Plymouth Congregational Church, July 26, 2009

The newly formed Mission Team here at First Plymouth has chosen the most fascinating theme for this coming program year. When we reduced the size of our Council from forty-one members to a more manageable nine, we no longer had the Ministry and program committee chairs present at the table. Thus, the moment the chairs of those groups went off of Council, we began a new vehicle for mission delivery, namely the Mission Team. And their self-chosen theme for this year is Finding Grace in Chaos.

In essence their questions were, "What will our witness be amidst all this chaotic news? What will our ministry be amidst these overwhelming needs? What will our good news be in response to the chaos in our midst?" In other words, as our world gets increasingly smaller, as the reality and impact of a global village are grasped and lived, how will we, as a beloved community gathered in the name of the God of Love, respond?

This actually is no small question because other people, and especially religions, are already answering it in myriad ways, and those ways are having serious global consequences. If I may be so bold to say this, particularly as a religious leader: as the world is getting smaller, so are its religions; they are getting downright puny, speaking only for their own tribe, their own nation, their own self-interest, everyone else be damned, literally.

Speaking specifically about Christianity it has been startling to watch a retrenchment into orthodox and even ultra-orthodox practices and proclamations. And remember here precisely what 'orthodox' means: ortho means correct and doxa means praise and belief. Orthodox means 'correct praise and belief.' And it's as if everyone thinks their orthodoxy is right and everyone else's is wrong. So in this time of chaos when there is such an urgent need to shatter the bounds of parochialism, to hear other languages and world views and to be a global community negotiating diversity, we are instead watching as increasing numbers of Christian communions are doing the opposite: actually shrinking the sphere of what is acceptable and what is not, claiming they have the market on what is right and wrong.

And apparently this applies not only to how other religions are wrong, but even to how other Christians are wrong. And I suppose this is only logical after all, for once orthodoxy is defined, everything else is, by definition, wrong; that is, after all, the purpose of establishing orthodoxy. So instead of meeting the expansive challenges of a global community, many Christian communions are strengthening the dividing walls of separation and parochial interests. How sad this is. And not only is it sad, it is deeply unbiblical.

Take, for example, our scripture lesson for today. It begins, "For this reason I bow my knees before the father ... " For what reason? We have come in on the middle of a discourse, in the middle of what was intended to be a sermon for the community of believers in Ephesus, and we need to be reminded not only of what the "reason" was for the bowing of the knees, but the reason for the sermon at all. That reason is given earlier in the discourse.

You see, the church in Ephesus was badly divided between Jews and Gentiles. Church conflict is not something that we 21st-century Christians have a market on. Oh no. The moment there was a church, there was conflict, because everyone claimed s/he was right (orthodox) while the others were wrong (or "wrong-o-dox"). Conflict was particularly pronounced in early Christian churches because they were trying to do what no religion had ever done before: to proclaim a God that transcended the national and tribal, and thus to invite into a new kind of spiritual fellowship peoples who for centuries had been religious enemies.

This new religion, this nascent church was inviting Jew and gentile, with no distinction. As it said earlier in chapter two, speaking to a diverse community of Jews and non-Jews: "For [Christ] is our peace; . . . he has made both groups into one and has broken down the dividing wall, that is, the hostility between us . . . so that he might create in himself one new humanity in place of the two, thus making peace, and might reconcile both groups to God in one body through the cross, thus putting to death that hostility through it." For this reason I bow my knees before the father from whom every family in heaven and on earth is named ... Love so powerful that it can overcome hatred. Love so full that it can unite enemies. Love so deep, broad, and high that it breaks down dividing walls and creates one new humanity. For this awe-inspiring reason...