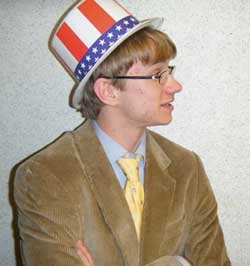 Once the clock ticks its way past 1 or 2 A.M., it seems like everyone is a philosopher. Some of the best conversations I've had in my life have come at late night college heart-to-hearts, although it's a miracle I remember them given how late the hour is. One common subject is, of course, religion. Seeing as I attend a small New England liberal arts college, few would be surprised to find out that students have some piercing questions about religion. Principal among these queries is the tenuous relationship between faith and reason. How is it possible to reconcile faith with the stark precepts of rationality?

The relationship between faith and reason has been one of the central questions in my life. There is a disconnect, however, between the forces of reason and those of spirituality. The unexpected recovery of a terminally ill cancer patient, for instance, is a joyous occasion for those involved, but is also fuel for the culture wars. The religiously inclined may see this as an act of Divine Providence: God suspended the laws of the universe and miraculously cured her! On the other hand, skeptics scoff and say that this was a fluke, an occurrence brought about at the intersection of science and luck. Undoubtedly, these two positions seem to be mutually exclusive, with each side fiercely clinging to their own interpretations, because if one side is right the other side has to be wrong. Right?

With all due respect to those on both sides of this divide, this bifurcation is at best unhelpful, and at worst actively malignant, poisoning both our public dialogue and our private lives of faith. Worldly events cannot be divided into two categories: those of God and those of nature. If we truly believe that God is always with us and is present in all things, this distinction is meaningless. If God is the all-powerful creator, then He is present in all things, not just those we cannot explain. In this way, even if we can explain a beautiful sunset as an interaction of photons from the sun and particles in the atmosphere, that does not prevent it from being a beautiful, or even miraculous, gift from God.

When I was little, I always wanted to have my cake and eat it too. I guess some of that attitude has not worn off, because I refuse to believe that I have to pick sides in this war. There is no reason why one cannot have faith in both God and science, or apply the principles of both religion and rationality to everyday life. My faith is strengthened, not weakened by this fusion; it suggests that God is present everywhere, whether we chalk up His presence to divine intervention or natural events. In the end, they may be one and the same. And that is something I can rest my faith firmly on.

Andy Hyatt is a sophomore at Middlebury College in Middlebury, Vermont. He is a psychology major, and may soon declare a Psychology and Religion double major with a focus on religious ethics. We'll have to see about that though. Andy is something of a bookworm, but also enjoys playing soccer and Quidditch (yes it's a sport), skiing, and many different types of board games. He is a Roman Catholic, and highly enjoys moral, religious, and philosophical discussions. Especially when he really has no business in being awake.