Tempest in a Teapot

By the Rev. Heather Entrekin 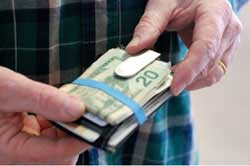 The economic crisis continues to dish its daily dose of angst and frustration. Madoff is in jail but investors are still losers.  Now we learn that bailed-out banks have made unseemly profits.  Economist Paul Krugman says the "financial industry's high-fliers are still operating under a system of 'heads they win, tails other people lose.'" (quoted in David Stevens, "Goldman Sach's Miracle Profits, Moneyweek,  July 24, 2009, http://www.moneyweek.com/investments/stock-markets/goldman-sachs-miracle-profits-44508.aspx).

Remember the fire and fury over million dollar AIG bonuses?  I’ve felt resentful and self-righteous with the best of them even though I realize that millions of dollars in bonuses compared to billions of dollars in bailouts are almost infinitesimal.  Of course, then I consider how much a million dollars, just one, could do for Interfaith Hospitality Network, Metro Organization for Racial and Economic Equity, Baptist Joint Committee, or the Monterey Bay Aquarium, and did I mention Prairie Baptist Church?  and then it doesn’t seem so small.

In the grand scheme of things, however, the bonuses have more meaning as a symbol of what is wrong with our culture and values than anything else.  But then the scramble by president, cabinet, Congress, and commentators to deride, disparage, and punish has felt empty and misguided. When it was reported that some of the wealthy recipients had handed back the bonuses, I felt a strange lack of satisfaction.

Could it be because the anger pointed at bonuses doesn’t belong there and, in fact, blinds us to the bigger picture and makes matters worse?  It’s like walking my dog past two dogs behind a big wooden fence.  They both want to charge out and meet and greet, or possibly attack, my dog but because they can’t, the bigger one jumps all over the smaller one.

We can’t fix the economy and we’re worried about our financial present and future so we dump on the guys who get a bonus.  But speaking for myself, vitriol and blame rarely improve a day.

What would better the day and the world?  I’ll think big here.  How about a long walk with the dog and a couple of biscuits for the canines behind the fence who only know how to act by instinct, not grace?  I could commit an act of generosity.  I could pay attention and give thanks for blessings like that bird song coming from the trees with a film of green on their branches or like a home and money for the mortgage. I could give thanks for little ideas about the economy and a computer through which to share them, for a few someones like you who read them, and for hope, tender hope, that will not quit.

I could keep heart, soul, and daily schedule focused on the big picture -- the one that’s all about loving God with all my heart, soul, mind, and strength and my neighbor as myself.


Heather Entrekin is in her 10th year as senior pastor at Prairie Baptist Church in Prairie Village, Kansas. Visit her at Heatherblog.