The Bible and Economics

By Richard A. Horsley 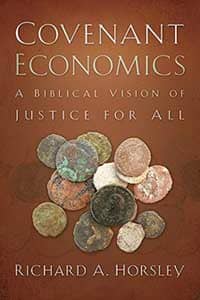 The Bible might seem like the last place one would look for information and guidance on economics. Despite the prominent role that the exodus and Covenant played in the formative history of the United States, the assumption has grown during the last century that the Bible is religious literature about religious matters. This is reinforced by the modern separation, particularly in "secular" societies, of religion and politics and the belief that economics are and ought to remain independent of religious concerns.

As our American ancestors from John Winthrop to Abraham Lincoln recognized in the biblical Covenant, however, economic concerns run throughout the Bible. The foundational event for Israel, the exodus, was an escape from economic as well as political oppression. Books of the Pentateuch include many laws and teachings on economic matters, from prohibition of interest on loans and cancellation of debts to damages for injury to draft animals and damage to crops. Tithes and offerings are the transfers of economic goods to the control and consumption of the priests. The people who are clamoring for a king to reign over them are warned that a king will take their goods and their property. King Solomon imposes forced labor, the very oppression from which God had liberated Israel in the exodus. Ahab and Jezebel frame Naboth so that Ahab can seize his vineyard, against God's guarantee that ancestral land was inalienable. The prophets rail against royal ofﬁcers' economic exploitation of the people.

Economic concerns are central also in the teachings of Jesus. The petitions of the Lord's Prayer focus on enough food to eat each day and the cancellation of debts. Jesus declares that it is harder for a wealthy person to enter the kingdom of God than for a camel to pass through the eye of a needle. He advises the wealthy young man who insists that he has kept the covenantal commandments to sell all his goods and give to the poor.

In the Gospel of Luke, the decree by Augustus Caesar, the Savior of the Empire, that people must pay tribute forces Joseph and Mary to journey to Bethlehem, where Jesus is born as the alternative "Savior." In his confrontation with the client rulers of Rome in Jerusalem, Jesus is forced to address this same question of the tribute to Caesar -- and does so in a way that does not assume the separation of religion from politics and economics. The apostle Paul is not just preaching his gospel, but gathering a collection from the assemblies of Christ for the poor in the Jerusalem community. The revelatory prophetic visions of John on Patmos include an uncompromising condemnation of the merchants and kings of the earth who supply the Roman imperial elite with expensive luxury goods.

Despite the prominence of economic issues throughout the Bible, the ﬁeld of biblical studies has generally neglected economics. In recent years, however, a few scholars have given special attention to the economic system assumed in biblical books and/or to economic concerns evident in particular texts. Studies of laws about cancellation of debts and inalienability of land in biblical and Mesopotamian law codes have signiﬁcant implications for economic concerns in the Mosaic Covenant in particular.

Sophisticated studies of key prophetic oracles have opened up a far more precise sense of the situation that the prophets were addressing and what they were protesting. Similarly, investigation of the political-economic context in which Jesus and his movement emerged has enabled us to hear previously undetected economic implications in his teachings.

Drawing on these recent studies we can formulate a provisional picture of the economic structures and dynamics in which the ancient Israelites lived and we can gain a sense of the economic concerns of the prophets and of Jesus and the Gospels. In the explorations of key texts in the following chapters it will become clear that a distinctively covenantal concern for economic rights and mutually supportive and cooperative community runs strongly throughout the Pentateuch, the Prophets, the Gospels, and the Letters of Paul.

Excerpted with permission from Covenant Economics: A Biblical Vision of Justice for All by Richard A. Horsley, published in 2009 from Westminster John Knox Press.

Richard A. Horsley is Distinguished Professor of Liberal Arts and the Study of Religion at the University of Massachusetts-Boston. He is a prolific author with twenty New Testament studies to his credit, including Scribes, Visionaries, and the Politics of Second Temple Judea, and editor of In the Shadow of Empire: Reclaiming the Bible as a History of Faithful Resistance, both from Westminster John Knox Press.