The do's and don'ts of defending Muslim women

By Fatemeh Fakhraie, Photo Courtesy of  Friends for Peace 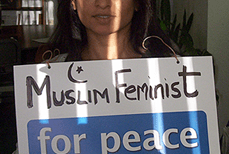 I recently wrote a piece for Double X in which I highlighted the fact that many non-Muslim feminists do not understand Muslim women or Muslim feminists accurately. Last year, I wrote "An Open Letter to White, Non-Muslim Feminists" for Muslimnista, which was a more acerbic version of the Double X piece:

"I notice a lot of condescension and arrogance when you talk to us or about us. Let me be clear: you do not know more about us than we know about ourselves, our religion, our cultures, our families, or the forces that shape our lives. You do not know what's best for us more than we do."

The letter was an unburdening. Yes, I wrote it while angry, after hearing yet another non-Muslim person believe that they held the key to female Muslim liberation because of the summer they spent in Dubai or the Muslim friend they had in college. But while my anger may have exposed readers to a rawer expression of my beliefs, I still stand by what I wrote, I still feel my anger is and was valid, and I still feel that it's important to call non-Muslims out on their privileges and prejudices about Muslim women's lives and manifestations of faith, and the arrogance in how they speak about and interact with Muslim women.

The recent statements on Aasiya Hassan's murder from NOW director Marcia Pappas highlight what I'm talking about. Despite the fact that Aasiya's murder was a cut-and-dried crime of domestic-violence, Pappas insisted on racializing it and "Islamocizing" it by calling it a "terroristic version of an honor killing". Her continued support for her statements, in the face of disagreement and point-by-point dismantling of her views by Muslims, Muslim and non-Muslim domestic violence workers, and other feminists, personifies the arrogance and prejudice my letter aimed to call out. Pappas, through her statements and actions, sends the message, "This is what I think of Aasiya. This is what I think of Muslims and Muslim women, no matter how many people prove me wrong."

When I published my Double X piece, which was admittedly more measured, it received a fairly receptive response. Though I know change is more often generational than radical, I believe more people are willing to listen to strategies for change in the dialogue between non-Muslim and Muslim women.

So I think it's time to revisit the underlying arguments my letter implied but didn't flesh out.

My difficulty with Pappas and those like her (whatever gender, color, or creed) is made up of several complex issues:

The arrogant-but-sometimes-well-meaning "I know what's best for you" attitude that flies in the face of respect for others' lifestyles, worldviews, histories, and differences, and ignores or disrespects Muslim women's personal agency. This is a major barrier and has been dubbed neo-colonialism for a good reason. Decades ago (even centuries), when the British colonized India, Egypt, Algeria, and other regions, the "I know what's best for you" attitude was what enabled them to oppress men and women (Muslim and others) in these regions.

The idea that another person outside a Muslim woman's communities and situations knows better about the issues she faces as a Muslim woman or as a woman of a certain ethnicity is impossible. While someone from outside my communities can offer an outsider's perspective, s/he cannot understand my issues authoritatively enough to know them better than I. And, in constructing strategies for change, assuming someone else's way ("Western" or secular or "progressive") is better often ignores the fact that the secular way may not fit into a Muslim woman's life, or a certain Western feminist model may not offer a Muslim woman constructive way to demand for the changing of laws that hurt her and her family. Refusing to believe that working within an Islamic or cultural framework can help me achieve the liberation I'm looking for isn't fair to me-this isn't cultural relativism, this is taking into account different forces that shape and have shaped a Muslim woman's circumstances, and the different issues that she faces.

Furthermore, speaking for me when I did not ask you to actually takes my voice away. It is oppression just the same when a feminists does it as when, for example, a man speaks for a woman without her consent.