The Holy Ghost in the Machine 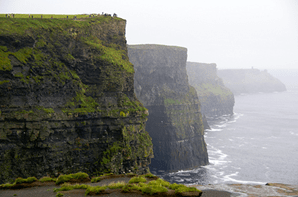 To read the personal background for the following article, see this entry at the Evangelical Gateway blog.

I cannot tell you how many times I have stood in awe before mountains and canyons, forests and cliffs, rivers and seas, marveling at the sublime majesty of God's creation and the incomprehensible power and intelligence that must have been required to conceive such wonders and bring them into being. Yosemite National Park, the northern California cliffs, the towering redwood groves -- all led my soul to magnify the Lord.

But I can tell you how many times I have stood in front of a room full of computers and marveled at God. The number is not hard to remember-because it is zero.

It is not that I have never seen technological wonders. I remember well when I first saw a massive laser array at the Lawrence Berkeley National Laboratory. I recall gawking at SR-71 jets, at supercomputers, at aircraft carriers, and at rockets and lunar landers. I remember seeing them -- I just don't remember being inspired by them, in the same way I am so often inspired by the works of nature, to marvel at God.

Why is that so? If it is extraordinary that God could make rivers, is it not also more extraordinary that God should make humans with the ingenuity to cross those rivers by designing and building bridges? If we should give thanks to God for the beauty of the ocean, should we not give thanks to God for the beauty -- and utility -- of the microchip? Is it not ingenious that God should make human eyes that can observe the regularities of nature, human brains that can penetrate those regularities to the laws beneath them, human imaginations that can devise new ways of making use of those laws, and human hands that can go about building and distributing new forms of technology? Technology has made shelters and irrigated fields, has crosses rivers and tunneled through the earth, has eliminated diseases and provided the means to overcome disabilities and handicaps, has given us undreamt-of powers of communication and organization.

Yet when I am driving in my CRV down the freeway, speaking (I admit it) on my cell phone with my sister across the country, who is using her computer to look up the map of the store where I am about to buy a new computer -- why am I not praising God for all these things? It is true that a bridge is not as beautiful as an oak tree, but the fact that we can build a bridge is beautiful and awe-inspiring. Perhaps the bridge or the computer does not point us toward God because we tend to take the glory for ourselves. Yet even though we made the bridge and the computer, we did so with powers that were given us by God. Or perhaps the bridge and the computer do not usher us into worship because we think they are "scientific" and God has no place in the scientific realm. Yet this would be a surprise to many of history's greatest scientists, who sought to understand the physical world precisely in order to understand God's glorious design. Science is only possible because we are creatures with powers of perception and intelligence, and we live in a world of God-given regularities and order.

Do you see the problem? The natural world is filled with "pointers" toward God, yet few of us work amidst the wonders of the natural world. More of us work amidst the wonders of technology, yet since we cannot see these things as pointers to God. Thus we are effectively cut off from God in our places of work. If we could sit in front of a computer and marvel at the work of God in fashioning a creation and creature for which such a computer is possible -- then we would find ourselves surrounded by pointers to God.

And those who work in industry and technology, in chemistry and engineering, should know not only that they engage in the holy work of redeeming creation and making it fruitful but that the works of their hands give evidence of the creative power of God.

Photos courtesy of J. Salmoral and ecatoncheires through a creative commons license at Flickr.

For more in the Faith@Work Consultation series, click here.