The Pope and the President

With the G8 Summit behind President Barack Obama and the long-awaited first social encyclical of Pope Benedict XVI made public July 7, the current economic and financial crisis fits prominently on the agenda of the dialogue between the Pope and U.S. President.  To understand the perspective that Pope Benedict brings to the dialogue it is helpful to consider Caritas in Veritate, an encyclical letter intended to commemorate the fortieth anniversary of Pope Paul VI's Populorum Progressio and delayed in publication in order to seriously engage the current economic crisis.  One could rightly expect this dialogue between these two world leaders to be an expression of caritas (charity/love) and veritate (truth) regarding both common concerns and points of disagreement.

Like Paul VI, Benedict XVI offers a vision of integral human development that is holistic.  Benedict's vision is rooted in love and truth, gifts received and gifts to be shared.  Benedict reflects on the relationship between gratuitousness and justice, in which justice is necessary but not sufficient.  He reminds people that we are called to act with both justice and love for the sake of the common good.  Failures in justice, love, and concern for the common good have contributed to the current economic crisis, and he calls for cooperation characterized by trust, solidarity, and subsidiarity.

While Benedict's letter was written for a global audience, the U.S. President's visit invites reflection on how the letter speaks to citizens of the United States.  Many in the United States would concur with Benedict's list of contemporary signs of the times in need of attention: "[t]he technical forces in play, the global interrelations, the damaging effects on the real economy of badly managed and largely speculative financial dealing, large-scale migration of peoples, often provoked by some particular circumstance and then given insufficient attention, [and] the unregulated exploitation of the earth's resources..." (21).

Benedict's analysis, however, challenges citizens of the United States, Democrat and Republican alike.  He highlights the detrimental effects of intellectual property rights on healthcare for poor countries, the weakening of social security systems in many countries in order to be competitive, the greater need for labor unions and the need for an expanded vision within labor unions to extend solidarity to excluded workers, the negative effects of labor mobility on marriage, food insecurity and the need to eliminate its structural causes, and the need to expand the concept of poverty to include the unborn because "openness to life is at the centre of true development" (28).

He points to the need for social responsibility of businesses, investors, and consumers; in purchases, allocations in retirement accounts, and work as an employee, individuals need to be attentive to the morality of their actions.  The call for increased development aid to poor countries, a focus on reciprocal duties as a counterbalance to assertion of rights, the possibility of a "large redistribution of wealth on a world-wide scale" (42), attention to energy consumption and its impact on conflicts, and reflection on responses to migration threaten the status quo for many in the United States, and this at a time when most experience greater struggles than they have in recent years.  In a country that values individualism, a call to solidarity and concern for the common good is a call to conversion.

Benedict's concern for the global common good leads him to echo Pope John XXIII's call for a world political authority.  Benedict states:  "To manage the global economy; to revive economies hit by the crisis; to avoid any deterioration of the present crisis and the greater imbalances that would result; to bring about integral and timely disarmament, food security and peace; to guarantee the protection of the environment and to regulate migration: for all this, there is urgent need of a true world political authority" (67).  This too challenges the status quo for Americans.  Listening to Benedict speak caritas in veritate as he interprets the signs of the times in light of the Gospel is both confirming and challenging -- a true call to conversion.

Angela Senander, Ph.D., is Chair of the Systematic and Moral Theology Department at Washington Theological Union, where she specializes in Catholic social ethics.

Nearer Than Your Own Soul
Frank Viola
3 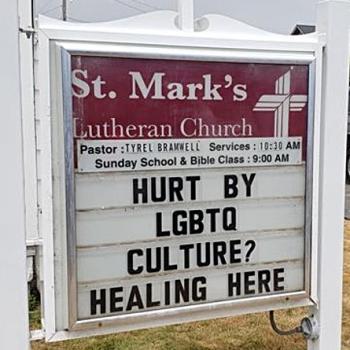 Big trouble in little Ferndale as Lutherans clash over church sign
Barry Duke
Get Patheos Newsletters
Get the latest from Patheos by signing up for our newsletters. Try our 3 most popular, or select from our huge collection of unique and thought-provoking newsletters.
From time to time you will also receive Special Offers from our partners that help us make this content free for you. You can opt out of these offers at any time.
see our full list of newsletters
Editor's picks See all columnists