Why Conservatives Should Support Gay Marriage 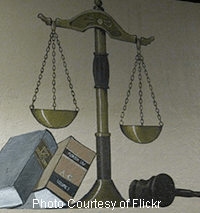 Rod Dreher, I think, had it right. Social conservatives ought to support same-sex marriage legislation. I have been ambivalent about the LDS Church's involvement in Prop 8. My own position is very much like that of Russell Arben Fox, an LDS Poli-Sci professor. I think that there is a creditable case to be made that the equation of same-sex marriage with traditional marriage, by denying that sex differentiation is a necessary element of marriage, tends to reduce marriage down to affection and consent.

The problem with the affectionate, contractual view of marriage is that it reduces the ability of marriage to serve as a public institution that models the long-term complementarity of men and women. More importantly, to deny that gender matters to marriage means that it becomes much less important as a mechanism for defining and socially enforcing the obligations that men owe to women and mothers.

I suspect that this is why, for example, blacks favored Prop 8 more than any other ethnic group, and why black women favored Prop 8 at higher levels than blacks as a whole. Some --though by no means all -- portions of the black community suffer from the breakdown of male responsibility, and black churches have been pushing marriage as a solution, a model of how men ought to relate to women. By stripping out gender, the institution becomes mainly about romantic love and consent, and it loses some of its ability to perform other important ideological work.

On the other hand, I don't think that gay marriage is the biggest threat to traditional marriage by a long shot, and because I think that homosexuality is biologically determined, I don't believe that gay couples will ever be a significant portion of the population. Indeed, if gay marriage becomes widely available -- as I think that it eventually will -- then I suspect that as a matter of social meaning it will be differentiated. There will be "marriage" and "gay marriage," which will be understood as similar but not entirely identical social institutions. At least, I hope that this is what happens. The notion that marriage is an institution that models how men and women relate to one another as men and women will continue, but in weakened form.

Unlike Fox, however, I have no warm fuzzies about the referendum process. Indeed, I think that referendums tend to oversimplify issues and reduce the give-and-take compromises that make for stable social settlements in a democracy. The polarization around Prop 8 is a good case in point. The more man-hours Mormons spend knocking on doors and distributing signs, the less likely they are to be willing to work for some long-term settlement less than total victory. The more time gay-rights activists spend demonstrating against hate by vandalizing Mormon temples and shouting epithets at temple workers, the less likely they will be able to see past their fury, understand the concerns of those with whom they disagree as anything other than bigotry, and work out a modus vivendi. Rather, the push will be -- as it has been in Massachusetts, Connecticut, and California -- to constitutionalize the issue. Should the political momentum continue as it has, this push will ultimately reach federal law as well, and an Obama presidency will be pushing the federal courts to the left.

In the long term, I suspect that social conservatives will lose the culture. "Friends," "Will & Grace," and all the rest have given the young in particular a model of marriage in which arguments that see it as anything other than affection and self-imposed obligation become largely meaningless, if not barbaric and intolerant. The danger is that the political momentum created by this cultural force will result in the constitutionalization of the issue.

As it happens, I think that compared to other advanced democracies, American constitutional law has a laudably libertarian (or at least relatively libertarian) record on free speech and, to a lesser extent, freedom of religion. These are important constitutional values, and I doubt that they would be swept aside by the constitutionalization of same-sex marriage. They would, however, I think be weakened over the long term.