A chance worth fighting for 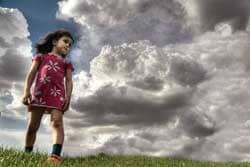 The physicist Erwin Schrödinger developed a thought-experiment to undermine the "Copenhagen" interpretation of quantum mechanics. A sealed box contains a cat, a radioactive substance, a Geiger counter, a hammer, and a flask of poison. The substance is 50% likely to emit radiation within a single hour, and when the Geiger counter detects the emitted electron it will trigger the hammer to break the flask, releasing the poison and killing the cat. According to the Copenhagen interpretation, both states (with and without radiation) must be superposed until an observation is made. In brief, nothing happens until you look.

Yet surely, Schrödinger argued, the cat must be alive or dead prior to our observation? The thought-experiment projects the consequences of quantum indeterminacy onto a visible canvas, showing what Copenhageners accept in the mysterious microscopic world, we reject intuitively in the macroscopic.

A madman sets 11 boxes, each containing a human baby, on Charles' front lawn. There is zero percent likelihood the poison will be released in the next hour in box one, a 10% likelihood in box two, a 20% likelihood in box three, and so on, until we reach a 100% likelihood for box 11. The babies will remain unharmed as long as no poison is released, and each box will open at the end of the hour. Charles is allowed to open the boxes and remove the babies, but each box he opens will cost him $10,000.

Charles will leave box one alone, since the baby will be unharmed and he will save $10,000; presumably he will open box 11, and we would consider him morally culpable if he did not. What of the other boxes? If Charles left box 10 alone, and the baby survived against 90% odds, would we consider Charles innocent of wrongdoing? Would we consider him innocent if he decided the costs outweighed the 10% risk for box two, even if the baby were unlucky and lost its life? Imagine variations. Does it make a difference if Charles is Charlotte? (Answer: no). What if there is only a one percent chance of destroying a human life, and the cost is $100,000? If the madman presented his dilemma to a neighbor, and the neighbor intended to risk the poison's release in box five, should Charles intervene?

I present this thought experiment because my most fundamental question concerning abortion is: whether or when abortion is the destruction of a human life? Yet I cannot find a definitive answer to the question of when human life begins in the womb, and I suspect many on both sides, if honest, would confess the same. What do we mean by human and life? What if human life does not begin at any discrete moment, or when is a life sufficiently human to claim special moral value?

I sympathize with the distraught young woman who stands before the trials of motherhood, and it is difficult to contend that she should face them for a six-week-old fertilized embryo. Yet I cannot see the dismembered bodies of late-aborted fetuses, or the videos of fetal activity in the midst of abortion procedures, without feeling as though we have gone horribly wrong.

If no leaf changes without the silent knowledge of the tree (Kahlil Gibran), we are all responsible for the least of these.

Yet the "indeterminacy" of the beginning of life works in favor of pro-lifers. The mere chance that abortion is the destruction of human life, or of nascent human life of high moral worth, is enough to stand against it. Why should we accept in the mysterious confines of the human body what we would not allow in front of our eyes?