A Muslim American Tale in Louisiana: An Interview with Dave Eggers 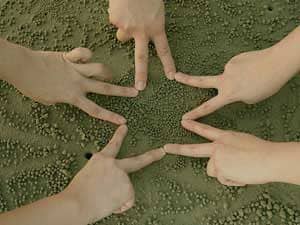 Fremont, California -- The Arab name "Zeitoun" does not immediately conjure up the image of a quintessential American hero. However, in celebrated author and editor Dave Eggers's new non-fiction book Zeitoun, the protagonist, Syrian-American Muslim Abdulrahman Zeitoun, proudly exhibits the best of America's virtues. Zeitoun emerges as a fearless Good Samaritan who stays behind in his hometown of New Orleans, Louisiana during the onslaught of Hurricane Katrina in August 2005 to selflessly help his neighbors.

Despite his heroic efforts, his own government falsely suspects Zeitoun and his friends of robbery after noticing them on one of Zeitoun's rental properties. The Federal Emergency and Management Agency (FEMA) subsequently arrests the men with force, accuses them of being part of the Taliban and Al Qaeda, and brutally detains them for weeks. In this interview, Dave Eggers discusses the amazing journey of Zeitoun and his family.

How and why did you become involved in this fantastic story about a Muslim American family that endures tragedy and discrimination with hope and resilience?

Dave Eggers: I am an editor for a non-profit book series called Voice of Witness, in which oral history is used to explore human rights crises. The second book in the series was about Katrina and the people neglected before and after the storm.

One of the stories in the book was about the Zeitoun family. Those of us responsible for Voice of Witness approached the idea of turning his story, and the story of the Zeitoun family as a whole, into a book. In late 2006, we decided to undertake this project.

Do you believe stories like this create a bridge of understanding so that people like Abdulrahman's arresting officers slowly realize that even the Muslim Zeitouns are citizens of America?

I think stories are the way to do it. In the first 70 or so pages of the book -- before the storm, before we first feel the winds of Katrina -- I was seeking to just tell a story about an all-American family that happens to be Muslim.

I think it's kind of startling that even though since 9/11 there has been a constant examination of Islam in the American media, asking questions like, "Who are Muslims?" and "What do they want?", there is still an incredible amount of ignorance and misunderstanding about this community.

Reading the Qur'an was so illuminating. I was able to find a wonderful translation by Laleh Bakhtiar, and it opened me up to the beauty of the faith in a way that no interpretation of the text had before. And, of course, in the book you find, very clearly, Islam's dedication to social justice, to peace and to the less fortunate.

Abdulrahman has so many motivations to help others in need: his faith, his sense of duty as a neighbor and an American, and his desire to honor his brother Mohammed's memory. When he's unjustly incarcerated, he questions himself and wonders if it was his hubris and ego that forced him to stay behind when others were evacuating the area. Why do you think he did it?

First of all, you can't shake this guy or scare him. He's seen a lot, having travelled the world on merchant ships. He's seen many storms and he remembers being on Arwad Island off the Syrian Coast where his grandmother lived when it flooded.

He is a guy who believes in destiny and that there exists a master plan. He thought, "This is God's will and I've been put here for a reason." When the story gets to the hubris part, well, once you're locked up, you have a lot of time to contemplate. That's when Zeitoun thought back, "Did I misunderstand my place?"

That's where the story of his brother Mohammed intersects, who was one of the most famous Syrian swimmers in history. So Abdulrahman has a lot to live up to, and a lot of his siblings felt the same way, too. I think that was in his mind when I wrote about him paddling around, thinking, "This is my chance to live up to the Zeitoun name."

Despite the Hurricane Katrina tragedy and the injustice of it all, his family ultimately emerges from this ordeal very hopeful. You and the Zeitoun family have started the Zeitoun Foundation, a non-profit organization created to help the victims of Katrina and citizens of Louisiana.

From the beginning, I told them I wouldn't be paid and I would not benefit from their story in any material way. I just felt that the money should go directly to non-profits and families that need it. The Zeitoun Foundation will be a lean organization, one that simply acts as a conduit to donate proceeds from the book to specific charities, including the Muslim American Society, Islamic Relief and Rebuilding Together, which helps return evacuees to their homes in New Orleans. Tangible and beneficial results can be achieved, which allows the Zeitouns to feel that something good came from their suffering.

Wajahat Ali (wajahatmali@gmail.com) is an attorney and a playwright whose work, The Domestic Crusaders, was the first major play about Muslim Americans living in post-9/11 America. This abridged article is distributed by the Common Ground News Service (CGNews) with permission from the author. The full text can be found at www.goatmilk.wordpress.com.