A person when formed not born 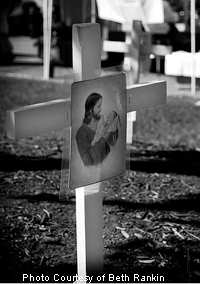 The Evangelical Protestant tradition on abortion would be consistent with what the public commonly refers to as the pro-life tradition. Evangelical Christians generally hold that abortion in most cases is the killing of an unborn child, and thus violates the 6th Commandment that prohibits intentionally killing of innocents. There are some exceptions: when the mother's life is genuinely in jeopardy, and most would make allowance in the law for cases of rape/incest (though they would generally insist that the manner of procreation is unrelated to the moral status of the child in the womb).

In this tradition, the philosophical and theological questions about "when life begins" are very important. Actually, the key involves the determination of when the unborn becomes a person. No one seriously questions that fetuses in the womb are alive, or that they are human. Thus, human life clearly begins at conception. But some in the pro-choice camp distinguish between a human being and a person, and so the critical question is that of the personhood of the unborn. Evangelical Christian tradition holds that there is no relevant distinction between a human being and a person -- that all living human beings are persons, and thus the fetus is a person from conception forward.

The Bible uses conception and birth interchangeably in passages such as Job 3:3, which states, "May the day of my birth perish, and the night it was said, ‘A boy is conceived!'" This poetic passage employs what is called synonymous parallelism, in which the second line of poetry restates the first one, essentially saying the same thing in different language. This type of parallelism suggests that the child who was "born" and the child who was "conceived" are considered the same person. Other passages that seem to use conception and birth interchangeably include Jeremiah 1:5, where God states, "Before I formed you in the womb I knew you, before you were born I set you apart; I appointed you as a prophet to the nations."

Psalm 139:13-16 describes the intimate involvement of God in the formation of the unborn. From a Christian worldview, this should be sufficient to discourage abortion, since it interrupts the sovereign work of God in the womb. However, the psalm further teaches a continuity of personal identity from the earliest points of pregnancy forward. Similarly, Psalm 51:5 says, "Surely I was sinful at birth, sinful from the time my mother conceived me." The general tenor of Scripture appears to support the idea that the unborn is considered a person by God, being described with many of the same characteristics that apply to children and adults.

Philosophically, this has support in the following argument:

1. An adult human being is the end result of the continuous growth of the organism from conception (this premise has hardly any debate).

2. From conception to adulthood, this development has no break that is relevant to the essential nature of the fetus (this is the debatable premise, but all the proposed breaks, such as viability, implantation, etc. are not related to the moral status of the fetus).

3. Therefore, one is a human person from the point of conception onward (this conclusion follows from the above two premises).

In view of this, abortion would be permissible in the rare occurrences in which the mother's life is in danger from the pregnancy. The reason for this is not that the mother is more of a person than her unborn child, but because in most cases, if the mother dies, the fetus will die too. Thus it is morally acceptable to treat the mother and hope for the best for the fetus. One can understand the desire to end a pregnancy that has come about as a result of rape/incest. But most evangelicals would argue that a second act of violence is not justified by the prior one, and would urge the woman to put the baby up for adoption should she not want to keep the child.

In the view of most evangelicals, the law should reflect these perspectives because there are fundamental civil rights at stake, namely the right to life of living human persons. That view is theologically grounded but can be argued persuasively on philosophical grounds that are independent of one's theology, and thus can be the basis for laws restricting abortion.

Dr. Scott Rae is professor of religion and ethics at Talbot School of Theology, the seminary of Biola University. Professor Rae's primary interests are medical ethics and business ethics, dealing with the application of Christian ethics to medicine and the marketplace. He has authored six books in ethics including The Ethics of Commercial Surrogate Motherhood and Brave New Families: Biblical Ethics and Reproductive Technologies. He is a consultant for ethics for four Southern California hospitals. He is a fellow of the Center for Bioethics and Human Dignity.