Abortion: A Feminist and Social Critique 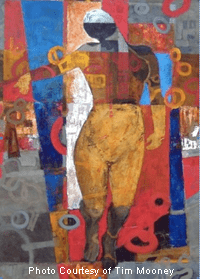 "Much discussion of abortion betrays the heavy hand of misogyny, the hatred of women.... [T]he Christian ethos is the generating source of the current moral crusade to prevent women from gaining control over the most life-shaping power we possess." In the early 1980s, pro-choice Christian feminists, as the quote from Beverly Wildung Harrison illustrates, blamed the patriarchy ingrained in the Christian tradition for the aggressive anti-abortion stance that sought to overturn Roe v. Wade.

How does patriarchy result in an anti-abortion stance? Harrison argues that the theological valuing of procreation as a special divine blessing arose as part of the need of men to control women, and especially to control the power of women to procreate the species. By making procreation sacred, men gain the right to deny women any choice -- whether it be through birth control or abortion -- with respect to that power, because it is a gift from God, not to be controlled by anyone. Under the guise of valuing life, then, the sacralization of procreation turns out to be a disvaluing of women's power over their own bodies and their unique procreative power.

The angry rhetoric and unflinching critique that Harrison and other early feminists offered reveals the fear women felt at the threat of having Roe v. Wade overturned. Harrison insists that pro-choice and pro-life advocates share a moral concern for the value of human life. But Harrison argues that while anti-abortion proponents advocate for the full human standing of the fetus, they often do not do the same for the women whose lives are irrevocably affected by an unwanted pregnancy. The concrete experiences of women's lives are ignored, she claims, in the debate about abortion, because value is abstractly assigned to "life" rather than to actual lives. Patriarchy has insured that full personhood and moral agency for women is an ongoing battle. Meanwhile, anti-abortion proponents are granting full personhood to a first trimester fetus.

Has there been much change in the debate since the '80s in the mainline Protestant tradition? Some denominations, like the United Church of Christ and the Unitarian Universalists, hold a strong pro-choice position. Others, such as the Presbyterian Church (USA), the United Methodists, and the Evangelical Lutheran Church in America, hold weaker versions of pro-choice, leaving the decision to the woman's individual conscience. The key position of these views is that, given the social circumstances of women's lives, and the various ways that an unintended pregnancy can have devastating effects, as well as the concern that women will seek unsafe abortions if they are made illegal, the state should not deny women the right to choose a safe, legal abortion. There is less of the harsh, feminist critique of patriarchy in these views, and more of a social critique regarding the ways in which social institutions do not provide support for women, either in their efforts to prevent pregnancy (through education and inexpensive and easy access to birth control) or in their efforts to raise children in economically and socially challenging circumstances.

The fact of the matter is, some women, especially in poor or rural communities, still have difficulty gaining access to birth control. Even emergency contraception, such as the controversial RU486 pill, meant to prevent a pregnancy after unprotected sex, is not widely available. In a recent (2006) study of the availability of emergency contraception at pharmacies in northeastern Pennsylvania, it was found that only 32% of pharmacies had it in stock. (Click here to read the report). Don't we have the social responsibility to provide women with the necessary birth control, even, or maybe especially, in irresponsible and unplanned circumstances?

Unless one's theological view is that a fertilized egg has equivalent moral value to a fully-developed person, then it seems that other moral considerations -- such as the impact of the pregnancy on the particular, individual life of the woman who faces an unplanned pregnancy -- must be considered as part of the moral equation, and public policy needs to reflect that. The choice to abort should be the last resort, and Christians should be doing whatever they can to help women avoid that last resort, as well as working to provide the safe and legal option if that is what her circumstances and her moral conscience conclude.

The real shortcoming, in the mainline Protestant discussions on this issue, is a frank discussion of all the moral issues at stake. Abortion is not one birth control option among others. Responsible sexual behavior should be taught. Fetal life, even the fertilized zygote, has significant moral value. Women's lives, individual and within the wider community, should be valued and supported. If we believe that abortion should be dictated by individual moral conscience, we are responsible to educate that conscience in light of God's good creation, and the moral value each individual life has before God.