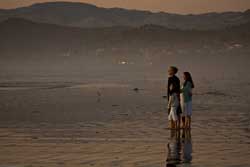 This scene from the Gospel of John portrays, in a particularly poignant way, the depth and manner in which Christ loved his friend Lazarus.  It reveals Christ as authentic and truly present.  Indeed, Christ was truly present to Lazarus’s sisters, Mary and Martha, when he miraculously raised their brother from the dead.  He was truly present at His Cross and Resurrection.  He is truly present in the Eucharist.  Christ is, in Catholic belief, the Real Presence.

As a Catholic mother of three children (one adult aged 21, two teens aged 18 and 16), I am constantly faced with the challenge of raising them to be – like Christ – loving, present and authentic friends.

Given the technology at their fingertips, I fear, on many days, that I am waging a losing battle. It is a battle in which presence and authenticity are the biggest casualties. In this age of Facebook, MySpace, Instant Messenger (IM) and Text Messaging (TM), just how present are my children?  How present, and how authentic, can they be?

After work, my daughter runs into the house and scurries upstairs to see the latest addition to her Facebook wall.  My son navigates the pathways of MySpace – all the while with multiple screens opening and closing, in rapid fire progression, on his IM chatter.  My younger daughter routinely sends upwards of 100 TM’s per day.  At any given moment, my children might be respectively engaged in up to a dozen simultaneous conversations.  How can they possibly be present – truly present – to twelve people at one time?  Friendship requires communication, to be sure, but faithful and lasting friendship requires a certain and sustained fraternal exclusiveness, a “you are uniquely special to me – above the rest” quality.   My 18 year old confides that: “Many of my Facebook friends are not real friends, Mom.”  That statement does not console me.

And what of authenticity?

By my own children’s account, Facebook and MySpace allow them the dubious luxury to act differently towards others than they would act in real life.  Without the risk of face-to-face confrontation, there is a tendency to be more friendly, more flamboyant, to present fabricated, embellished, and often fake images of oneself.  The 8th Commandment exhortation that “You shall not bear false witness against your neighbor” and the dictum of John 8:32 “you will know the truth, and the truth will set you free” are, in cyberspace, very easily discarded, and the distinction between what is real and what is artificial disappears.  Then, there is the issue of the posted pictures, thousands and thousands of them – from the prom, the school, the vacation, the play – prompting endless comment, and unleashing ego and vanity to surge, unchecked.  In this counterfeit dynamic, focus turns from Christian caritas to self-indulgent narcissism and frivolity.

Aristotle once remarked that the nature of true friendship is to always seek the good of your friend and to never stop working towards it.  The moral activity of a Catholic is a calling to move ourselves – and our sisters and brothers -- toward the theological virtues of faith, hope and charity, as well as towards the cardinal virtues of prudence, justice, fortitude and temperance.  Are true friendship and the movement toward virtue remotely possible in this manic social networking age – or are our children all just entombed in the minutia and myopia of illusory graffiti walls?

Consider these quotes from William Falk, writing in The Week magazine on March 27, 2009:

Truth is, there were times in my teen years when I would have killed for the distraction of some online friends.  But I don’t envy the Facebook generation.  Living the in the blab-o-sphere, with half a dozen open channels at all times, seems more like a burden than a pleasure, and the endless back and forth more an addiction that a choice…….(T)here is something to be said for looking for solace, and clues, inside your own being.  Alone, you have no choice but to make friends with yourself: if you never manage that, your virtual friends won’t do you much good.