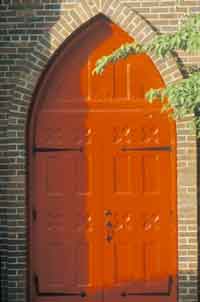 This past June, thirty denominational leaders met at Claremont School of Theology for the second major meeting in the "Transforming Theology" series.

One thing the denominational leaders did agree on: "mainline" churches have undergone a steady decline in membership for several decades, and the situation has now become critical for many of the mainline denominations. Huge numbers of congregations are now fighting for their survival, and many will close. Some experts predict that as many as two-thirds of the mainline congregations that exist today will close their doors over the coming two decades.

Why? What in the American situation has changed so radically that once prosperous churches and denominations would now be struggling in this way? Of the many causes, nine in particular strike me as especially important. (The first two points were suggested by my colleague and frequent co-author Steven Knapp, and I have quoted his words):

(1) "People no longer believe that church attendance is socially necessary, that is, necessary for the social health and perhaps even the economic survival of individuals and their family, either because churches provide the only context for social interaction or because they are necessary to the relationships on which careers and businesses depend."

(2) "People no longer believe that church attendance provides the only or the most important means of establishing and maintaining a sufficiently strong connection with God, however such a connection is specifically understood (for example, in terms of salvation, spiritual health, a life of meaning, etc.)."

(3) Many of the institutions that once lay at the center of our society are equally endangered (Boy Scouts, Native Sons and Daughters of the Golden West, Kiwanas, Masonic groups, etc.). As a society, we generally don't join institutions anymore; instead, we stay with family and friends, use electronic entertainment, shop, or go online. For how many people today is church coffee hour the social highlight of their week? Many people prefer to watch reality TV in order to see humans "as they really are."

(4) The classic modes of church teaching -- reciting language together and listening to a man talk for twenty minutes -- are no longer effective modes of communication for Americans. (Classroom teachers today show videos, or at least PowerPoint.) For many, hymn-writing and hymn-singing no longer have the force they once did.

(5) The traditional church was a family unit. It included not only mom and dad and the three (six?) kids, but also the grandparents, aunts and uncles, etc. By contrast, today there are fissures even in the nuclear family. No longer centered on multi-generational family units, mainline churches struggle to retain their members.

(6) Most of us do not live in one place long enough to put down real roots. When three generations of your family were hatched, matched, and dispatched in your local church, that was a pretty strong magnet to keep you involved. Now families may move seven times or more before the kids leave for college.

(7) Our communities are not only continually in flux but massively diverse in their beliefs, values, and social identities. Church communities in the U.S. used to be highly homogenous; difference was dealt with by having a huge number of churches. With fewer churches left, there will now be a greater variety of income, class, education, ethical conviction, and political belief in a single congregation. That makes people uncomfortable, and they are voting with their feet.

(8) Pastors today are generally not viewed as moral authorities in their communities, and theologians do not speak for and to the nation. Paul Tillich's Courage to Be was a bestseller, and Reinhold Niebuhr was on the cover of Newsweek. Walter Rauschenbusch's Christianity and the Social Crisis was a national bestseller for three years beginning in 1907. Church leaders and theologians no longer play that prophetic role in today's world.

(9) We are no longer blending powerful theologies with transformative ministries in the world. Churches and denominations that are actively involved in "social justice ministries" are often unable to give a theological rationale for their actions that people find moving and compelling. By contrast, the theologies that move people tend to be more privatistic, focusing more on individual salvation and individual religious experience, or more concerned with separating the church from the world and defending the superiority of Christian belief over its competitors.