Contraception and Abortion in Islam 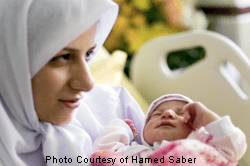 Islam's views on family planning are important for our planet since one out of every six people on this earth is a Muslim.

What can be said from the outset is that there is pluralism in the Muslim world as there is everywhere. There are conservatives, liberals, and those who claim to be centrists. No major religion is a grid into which all the faithful neatly fit. In approaching Islam, it is necessary to see what the teaching authority structure is. Clearly, the Quran is the prime authority, considered divine revelation.

However, the authority of the Quran is not magical. Isma'il R. Al'Faruqi makes the interesting point that Muslims do not claim any miracles for Muhammad to shore up the authority of the Quran. "The Quranic revelation is a presentation to one's mind, to reason." There is no papal figure or ruling synod in Islam that can impose its views. "In Islam religious truth is a matter of argument and conviction, a cause in which everybody is entitled to contend and everybody is entitled to convince and be convinced." Certain institutions, like the Al-Azhar University in Cairo, have significant teaching prestige, and the opinions and pronouncements of certain authoritative persons carry a good deal of weight, but their weight is not so heavy as to crush personal conscience.

Also, as Riffat Hassan points out, the Quran is not "an encyclopaedia which may be consulted to obtain specific information about how God views each problem, issue or situation." It is not a blueprint for moral life covering all the questions from the 7th to the 21st century and beyond. For this reason, there are other sources of truth in Islam. The Hadith are sayings attributed to the Prophet Muhammad. These do not all agree and the authenticity of many is doubted and debated. The Sunnah is the summation of practical traditions rising out of the life of Muhammad. There is also the huge body of legal literature known as Shariah, which again is contradictory at times. Some of its regressive and anti-woman prescriptions are preferred by right-wing zealots. However, the Quran is the Supreme Court, and its central values, outlined above, hold sway over any later interpretation. The prime value there is justice animated with mercy. Whatever contradicts that is not true to Islam.

There is another principle in Islamic teaching that is central to Muslim ethics. It is called ijithad. This is the heart of any true religious ethic. It means that you analyze the unique data of a current moral problem and argue from Quranic principles, using analogy and logic, to come to the best and most reasonable solution. As the jurist and philosopher Azizah Y. al-Hibri says, this gave Islamic ethics great flexibility. "It is an essential part of Quranic exegesis because Islam was revealed for all people and for all times." It allows Islamic ethics to respond realistically to new problems where there is no spelled-out answer in the Quran. It established Islam's respect for our faculty of reason.

Learn why semen in Islam has no special value: Islamic jurisprudence on family planning, contraception and abortion

In Islam, as in virtually all religions, fertility is highly prized and children are a gift of God to bring "joy to our eyes." (Surah 25: Al-Furqan:74) Conservatives also argue that family planning is a lack of trust in the sustaining God. They cite texts such as this: "There is no creeping being on earth but that upon God is its sustenance." (Surah 11: Hud:6) The Quran also says that if we place our trust in God that that is enough. My mother's Irish faith comes to mind: "God will not send a child without sending the means to feed it."

This naive and passive trust that no matter what we do or don't do God will make up the difference does not bear scrutiny and does not face up to the perennial fact of starving children. It is dismissed by Islam's best theologians. Theologian Fazlur Rahman says that using the Quranic references to God's power and promise to sustain all creation to argue "for an unlimited population out of proportion to the economic resources is infantile. The Quran certainly does not mean to say that God provides every living creature with sustenance whether that creature is capable of procuring sustenance for itself or not." We are not passive sheep waiting to be fed, in the Islamic view. We are God's vicegerents on earth, gifted with reason and talent. God has shared responsibility for providence with us and has given us the power to be prudent, to see problems and do something sensible about them.