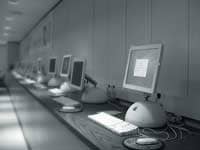 When it comes the Internet, I'm first generation: an immigrant from the world of Smith-Corona portables and the whirling miracle of an IBM type ball. I keep a Selectric for old time's sake. Sometimes I turn it on to hear the wondrous clatter of a machine whose parts actually strike the page. My interest in PCs was actually sparked by clicking. I liked the way the keyboard sounded when Matthew Broderick pounded it in War Games. I wanted to make that clicking sound, too.

As it turns out, I'm a pretty good clicker. I lack the fluency of my children and their friends, who speak the language of this world with the fluency of natives. I'll never forget the revelatory moment we took our first video game out of the box. It took an instant for my son to figure out the way to navigate his little digital plumber through its maze of hazards. I wondered why he didn't need to read the directions first.

But my level of enchantment  exceeds his by far, if only because I was there at the beginning and I remember life before instantaneity, the signal quality of the cyber world we have made. If I'm sitting at the table with a group of students and encounter the God of Psalm 56 who tenderly collects our tears in his flask, it takes us a second to navigate to ampullae, the half-remembered little vials of Roman matrons. It bumps out the discussion and makes the conversation real. The author of the psalm lived in the same world we do.

By rights, I should be threatened by this technology. I'm a rabbi, not a priest. It means that I operate in the world beyond the Temple, without the props of lineage and antiquity, a biological connection to the generation of the Founders. Every rabbi is, in a sense an arriviste; educated, not born, into his/her role in the community. But that doesn't mean that my guild of professionals is without resources. To this day, people assume that we know a few things, and knowing sometimes creates a zone of deference.

The Internet puts all of this in jeopardy. Theoretically, anyone can go to rabbinical school, but for all practical purposes, hardly anyone does. But everyone can get to myjewishlearning.com, and see a searchable abundance of top flight material. Just as Jews claimed printing with early-adopter zeal, we've made the Internet a whirring machine of Jewish learning. The key here is that its resources are easily retrieved, with the potential to make everyone a kind of expert. Why ask your rabbi to opine on the Omer period, when you already know the dozens of exceptions to the rule that prohibits marriages during this interval? The same dynamic now operates in medicine, and it makes the lives of my physician friends the proverbial living hell. All authority is under cyber-siege.

Personally, I'm intrigued by the challenge. Over and over again, it forces me to acknowledge one of the great and uplifting truths of the tradition: that it's deeply pluralistic, richly multi-vocal, and it accommodates contradiction with a kind of miraculous grace. Rice is and isn't kosher for Passover. We are permitted to execute the stubborn and rebellious child, except that the byzantine rules make it impossible to do so. It means that I've been forced to reposition myself, not so much as a defender of the faith, but enthusiastic guide, co-learner, and advocate. I've noticed a shift in my professional discourse. My language has moved from pronouncements to questions; from the authoritative tone of the newbie rabbi to a quieter, more complicated and reflective dialogue. "Forced" is probably the wrong word for this process. It feel s more like discovering an entirely new self.

The Internet is the crucial element in this shift, in the way it flattens hierarchies, promotes egalitarianism, and rewards industry, patience, and curiosity. It invites all of us into a borderless world in which everything leads to everything else, and nothing is contained in its own separate domain.

That's the final source of its attraction for me. I'm not the first to say that, in its roaring plenitude, the Internet looks exactly like rabbinic literature, with its carpet pages of text and commentaries, its fringe of notes and elaborations and cross-references. I know that when the Talmud thinks about rain, it will think about drought and crops in the field. It will move from there to plague and soldiers, and then marauding animals on the edge of town, until it thinks its way through catastrophe in general, and develops multiple strategies for coping and survival.