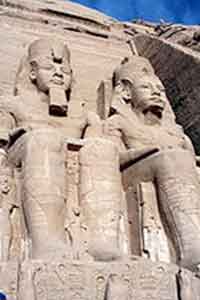 While I was reading my newspaper at breakfast in Cairo on June 28, I was stunned to discover that an Egyptian leader I was scheduled to see that evening had been suddenly imprisoned. I was stunned but, as anyone familiar with the Mubarak government, not surprised.

The arrest and detention of Abdel Moneim Aboul Fattouh is but the latest reminder/evidence of the lack of democracy and human rights in Egypt and many parts of the Arab and Muslim worlds.

For decades, the common charge is that Islam and Arab culture are incompatible with democracy and human rights. The easy and common culprit we identify today is religious extremism and terrorists. But beyond this superficial response are the deeper causes, too often including the policies of Arab/Muslim and Western leaders. Western principles are often subordinated to perceived "national interests" and thus our support for authoritarian regimes. Many Arab rulers whose positions are due more to heredity, coups, and rigged elections rely on military and security forces, repression, and corruption as their preferred sources for "legitimacy." But what does the continued detention of Abdel Moneim tell us? Post the Obama-mania, engendered by his address in Cairo on June 4, what can Egyptians expect?

Dr. Abdel Moneim Aboul Fattouh, a physician, and member of the Muslim Brotherhood, served as the head of the Doctor's Syndicate from 1988-1992 and has been the General Secretary of the Arab Doctor's Union since 2004. A pragmatist and reformist, he is an influential leader of a younger generation of moderate reform-minded Islamists in Egypt. Amr Musa, the General Secretary of the Arab League, recently called for his release. A member of the Guidance Council of the Muslim Brotherhood since 1987, Abdel Moneim recently participated in the funeral of President Mubarak's grandson. Not surprisingly, he has long been seen both within Egypt and outside as a moderate, admired, and respected professional.

Yet, he was arrested on charges of belonging to a group called the Global Muslim Brotherhood Organization and was part of a wider crackdown on Muslim Brotherhood leaders and bloggers. After several days, Aboul Fattouh, who suffers from sleep apnea and requires a respirator, was allowed to have one, but as his health deteriorated, he was transferred to Qasr al-Aini hospital. There was a solidarity conference for Aboul Fattou at the Journalists' Syndicate; not surprisingly, as has been common in Egyptian elections and many meetings organized to publicly speak out or protest government repression or injustice, the meeting was quickly broken up by riot police. As with many Egyptians, like the internationally prominent secular academic and civil society leader, Prof. Saad Eddin Ibrahim, this is not the first but the third imprisonment of Abdel Moneim.

This is a country where both U.S. State Department and major international human rights organizations have documented the imprisonment (and often torture) of thousands of Egyptian citizens -- not simply terrorists but any major reformist voice that earns the government's displeasure. The arbitrariness of this tactic has often been proven by the number of times the more independent minded Egyptian judiciary has eventually found many of those detained like Saad Eddin and members of the Muslim Brotherhood innocent and ordered their release, only to be reasserted again and again. So, where do we go from here?

President Barack Obama inherits an American legacy, described by Amb. Richard Haas in a surprising speech when he was a senior State Department official in the George W. Bush administration as "democratic exceptionalism," which Condoleezza Rice's address at the American University in Cairo on June 20, 2005 described as America's record of supporting regional tyrants for six decades; it was wrong, she said, and would be reversed. Regrettably, this policy initiative died quickly as the Bush administration remained restrained in responding to the violence that occurred during the 2005 presidential elections and moved aggressively to blunt and undermine the internationally monitored and supervised elections that brought Hamas to power in 2006.

Obama clearly stated in his inaugural address his desire to distance himself from the Bush legacy and return America to its principles and values. And most importantly, Obama, like Rice before him recognizing Egypt as a center of gravity for region, went to Cairo. There he affirmed his commitment to democratic freedoms and human rights. While acknowledging that "no system of government can or should be imposed upon one nation by any other," he also stressed, "That does not lessen my commitment, however, to governments that reflect the will of the people.... I do have an unyielding belief that all people yearn for certain things: the ability to speak your mind and have a say in how you are governed; confidence in the rule of law and the equal administration of justice; government that is transparent and doesn't steal from the people; the freedom to live as you choose. Those are not just American ideas, they are human rights, and that is why we will support them everywhere."