World-renowned hymn writer John Bell is publishing a new book, Ten Things They Never Told Me About Jesus: A Beginner's Guide to a Larger Christ. If you're a John-Bell-Celtic-Iona fan, you'll snap up the new book -- and soon you'll be tearing it apart to pull out John's fresh ideas. 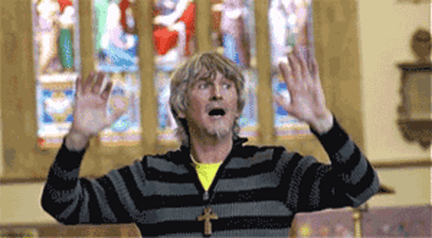 For the rest of us, who may not be so familiar with his work, the most important thing to explain about John Bell is that he works at the core of the Iona Community. This is a Scotland-based, international network whose collective name captures its two central missions: First, these men and women celebrate the Celtic-Christian insights that have arisen from the legendary island of Iona -- and they work in community.

You might have skipped over that second point. We all talk about "community." But for Iona and John Bell, community is where the Spirit of God works.  Here's a prime example:  Even though Bell's music is sung in churches around the world, he argues that hymns are not a personal product. In fact, he strongly critiques those Christian singer-songwriters who write deeply personal songs and then publish them as contemporary hymns. Bell does encourage people to create personal songs, poetry and other creative arts expressing their faith -- but that's not the same thing as creating useful hymns and liturgies for worship.

Worship should be a community experience, Iona teaches us. And, the community should form its own worship. So, Bell wouldn't think of composing a new song and offering it to the world as a finished "hymn." He road tests his works in many congregations. He revises his works with the needs of other people in mind.  That's why Ten Things They Never Told Me About Jesus is a kind of Bible-study guide to the life of Jesus. But it's also a book jammed with ideas about how people, working together, can roll their sleeves up and discover a far larger Jesus than the little bearded figure in children's picture books.

HIGHLIGHTS OF OUR CONVERSATIONWITH HYMN WRITER AND TEACHER JOHN BELL

DAVID: It's terrific to talk with you!  Read The Spirit Publisher John Hile and I have traveled to the isle of Iona, off the coast of Scotland, on two different pilgrimages. We've published a series of articles about our first pilgrimage -- articles that continue to be popular with readers. Millions of Americans love your hymns. But I think it's important to explain that your mission in life is a lot bigger than song writing. The opening line in the Wikipedia entry about your life says that you're "a hymn-writer" -- period. What do you think about that? Are you "a hymn-writer" -- period?

JOHN: I don't think of that as defining my life. I don't sit down every week and decide I have to write a song. I only write new songs to help people. If we find a new need, I may write a new hymn. It's not like a career choice I made. When I was ordained into the Church of Scotland years ago, my first job was in youth work. We didn't have many ministers engaged in Scotland in youth work. I was one of only two at that time. It was during my 10 years in youth work that I became aware of how much people's lives are shaped by hymns. There are so many old hymns still with us and they cause some confusion for people. Are we seen by God as "worms" or "blight" as some of the older hymns tell us? Or, are we "flowers" with potential and beauty?  I want to help people find bigger categories in which to hold God and Christ and Spirit -- and themselves. I want to help them supplement and expand their images of God beyond those old images we've inherited from Victorian times in many cases.

DAVID: That's a great way to introduce this new book. When I first heard the title, I thought it was a Bible-study book. But, now that I've read it, I think it's more like a workbook -- or sourcebook of ideas -- for congregations.

JOHN: This book is biblically substantial. I was concerned that anything I would write about the Bible be solid and sustained.  But, in each chapter, there are references to working with people, with groups of kids, with congregations -- settings where questions are raised about the background of Jesus. I want to help people ally both the scriptural witness and people's experiences.