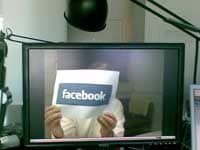 We evangelicals are nothing if not innovative. While we rarely operate as trendsetters, we are unabashedly trend-exploiters. From turning our churches into full-service mega-malls, to infusing ancient liturgies with heavy metal in cozy, coffee-laden confines, evangelicals make no apologies for "becoming all things to all people that by all means we might save some." (1 Cor 9:22)

This unequivocally applies to the internet. Any church worth its salt must have an online presence. This presence initially served mainly a welcome sign and information board for local church activities. But it has grown to envelop almost every aspect of congregational life. Sermons are podcast and music is you-tubed with some services produced for web-consumption only. Blogs and chats proliferate along with tweets and status updates as church members "stay connected" in ways they haven't been able to since the collapse of the geographical parish. The internet is also a means of evangelism, as myspace missionaries troll cyberspace for any forum in which they can offer a gospel angle.

When against my better judgment I decided to preach a sermon series on the book of Leviticus, I decided that the best way to do it would be through a reality sermon series. Leviticus was written not to be read, but to be lived out as God used it to shape his chosen people into holy people. I managed to recruit 20 people to live for one month according to the book of Leviticus, just to see what would happen. But how would we do this as a community (since Leviticus only works when you live it out with others)?

Enter Facebook, the gargantuanly popular social-networking site. Facebook would also provide the perfect platform for our makeshift Levitical tribe. Because the 20 participants were spread all over the place, being able to keep up with each other online everyday supplied a kind of virtual community within which to live Leviticus together. It would also allow for communal oversight. Lack of discipline was a big problem for the ancient Israelites, and certainly it would be a problem for us too. Facebook's status updates, provided people were honest (which Leviticus 19:11 commands), helped us keep tabs on who was keeping kosher and who needed help to keep from falling off the Levitical wagon. Of course, as it turned out, falling off the wagon was as instructive as successful obedience. Some of the best lessons were learned by failing.

As it turned out, we learned plenty. But since the lessons were intended for congregational consumption, and not just for our own personal piety, I needed a way to convey this beyond the sermon illustrations our experiences fostered. So we set up a "Living Leviticus" group for all to see where we posted our adventures as text, pictures and videos. People from across the congregation joined the group and commented on our experiment. Moreover, people from around the world did too. The opportunity for others to watch and weigh in fulfilled the Levitical ideal of having God work in our midst "in the sight of the nations." (Lev 26:45)

And yet Facebook also allowed in a number of legalistic types who became surprisingly obsessed with whether we were properly keeping the law. At times it was like having a bunch of web-based Pharisees on our tail. At the same time, our visibility led to the experiment being picked up traditional media outlets. Christianity Today ran a feature article, PBS produced a piece for a series on online religion, and Hachette publishing has contracted a book to be published next fall (though of course all of this is also available online).

And yet despite its ability to keep Christians connected in a fragmented and mobile world, the internet provides connectivity at a price. Thomas, one of our Levites-for-the-month, described attending a birthday party where the birthday girl spent the entire time tied to Gchat from her iPhone, completely ignoring her in-the-flesh guests. Accused of being addicted to technology, she insisted that all she was trying to do was "stay connected." Our youth minister talks about how kids rush home from school, leaving the people they were just relating to face-to-face, so that they can "connect" with these same friends facebook-to-facebook. I like to think that the Trinitarian God, existing as he does in eternal relationship, has wired humans made in his image to be relational people. And yet I wonder whether the internet is wiring us for an ironic kind of relationship whereby we "stay connected" while staying completing alone.

Daniel Harrell is a minister at Park Street Church in Boston and holds a PhD in psychology from Boston College. He is the author of Nature's Witness: How Evolution Can Inspire Faith and the forthcoming How to Be Like God: One Church's Experiment with Living the Old Testament Book of Leviticus.

About Daniel Harrell
Daniel M. Harrell is Senior Minister of The Colonial Church, Edina, MN and author of How To Be Perfect: One Church's Audacious Experiment in Living the Old Testament Book of Leviticus (FaithWords, 2011). Follow him via Twitter, Facebook, or at his blog and website.