Pagan Religions on the Web 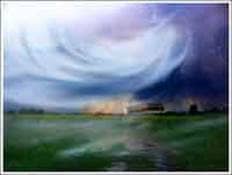 As with every other human endeavor, the ancient/future religions that comprise contemporary Paganism have been profoundly affected by the advance of the Internet. Paganism is a broad term that encompasses many Earth-based or Nature-oriented religions, some with an ethnic focus as well. Pagan religions have experienced tremendous growth and change over the past twenty to thirty years, and this growth has expanded beyond measure with the popularity of the Internet. Cyberculture seems to have a special appeal to Pagans. We have readily embraced the Net, e-mail, chats, blogs, virtual realities, and the many other attendant features of cyberculture.

With the Diaspora, Jews remained bound as a people by their sacred text, the Talmud, in spite of having no homeland. The endless discussion of passages and meanings the text generated held the Jewish people together as a tribe. They became known as the People of the Book. I see Pagans evolving into what I will call the People of the Web.

Prior to the advent of the Web, Pagans were isolated from one another. We did have working groups -- commonly called covens, circles, groves, or nests -- and we had "traditions," or families of covens whose members had learned from each other and passed on teaching via lineages. If and when a coven grew large, it "hived": a member who had been adequately trained took some other with her and formed a new coven, or simply left and created a coven from his or her own knowledge. However, several covens and traditions could exist in the same city, or even in the same neighborhood, and never even know about one another.

Annual Pagan festivals 1 in rural areas countered some of this fragmentation. Festivals promoted the building of friendships and sharing of information and experiences. However, most Pagans (Witches in particular) lived their lives in the broom closet. Discretion was the safe and prudent approach when it came to our religion. We kept ourselves, and our groups, to ourselves.

The Net changed all that. On the Web, isolated individuals and groups found one another. On the Web, networks were woven around common concerns and goals. The Web allowed community to be created where none had been. The anonymity of online communications liberated Pagans to express their thoughts and feelings and experiences in relative safety. So in a sense the Web became our church. By following threads, by overlapping and interconnecting our weavings, Pagans have woven a culture in cyberspace that is manifesting in terraspace.

The Net has given us, and everyone else with Internet access, unprecedented networking capabilities. It has facilitated the building of community, both online and off. It has allowed previously fragmented groups to find each other and previously isolated people to find community. The Web has fostered the growth of Pagan rights organizations, Pagan publishing, Pagan studies, and mobilization for Pagan safety and civil rights. It has provided us with unlimited resources to learn about our ethnic and cultural heritage, to reconstruct ancient rites, and to bond around these sharings.

All of these changes have engendered the unique phenomenon of online teaching, a medium of instruction that has now become common in all types of education. I have been involved in the creation of the first graduate-level online seminary 2 for Pagans, Cherry Hill Seminary. Our classes are accessible to any qualified Pagan (by qualified, I mean one who has an undergraduate degree) anywhere who has Internet access.

Some Pagans perform rituals and magical workings in cyberspace when once we could only practice them in terraspace. As well, the Internet facilitates national and international spells. It has inspired the formation of online covens and has even led to the creation of new traditions that exist only in cyberspace. While the Net has fostered online teaching and online magic, it has also increased our need for guidelines to evaluate any ventures we may be contemplating.

My late friend Judy Foster often said, "If we Witches do anything, we look for patterns. It's what we do." The patterns of Nature are, in many ways, mimicked by the patterns of the Internet. In popular culture, Witches are often depicted with spider webs nearby -- in a doorway or window frame, hanging from a fireplace mantel -- the places spiders weave their webs when they live in human habitations. We Pagans generally see all life as interconnected and interdependent. What occurs in one place affects other places, like the plop of a pebble in a pond that makes ripples all the way to the edge.

Pagans respect both rational, scientific pursuit of knowledge and emotional, intuitive, experiential perceptions, making us especially welcoming to modern technology and computer culture. The many Pagans who work in the computer industry, as well as their colleagues who become adepts in computer technology, are called "technopagans." Technopagans see the patterns of magical technologies and schema within the workings of computers and electronic media.

Erik Davis attributes this to what he considers a basic desire on the part of technopagans "to honor technology as part of the circle of human life, a life that for Pagans is already divine. Pagans refuse to draw sharp boundaries between the sacred and the profane, and their religion is a frank celebration of the total flux of experience: sex, death, comic books, compilers." 3