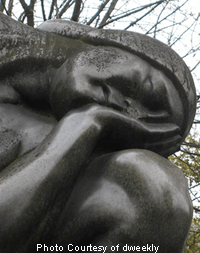 You may have heard the old joke, "Question: According to Jewish tradition, when does life begin? Answer: The fetus is not considered viable until after it graduates from medical school."

Okay, maybe not medical school. But the question as to when life begins is an important one in the debate about abortion.

It is clear from this text that causing a fetus to abort is a crime, but not a capital crime. It seems, then, that a fetus is not a "life" in the same sense that a person is a "life." The Talmud makes this even clearer: "If a woman is having difficulty giving birth, one cuts up the fetus within her and takes it out limb by limb, because her life takes precedence over its life. Once a greater part has emerged, you cannot touch it, because you may not set aside one life for another." (Oholot 7:6) Rashi, the great medieval commentator explains: "For as long as it has not yet emerged into the world, it is not a nefesh, and one may kill it to save its mother."

So when does life begin? Not in medical school, but at birth.

The Talmud not only permits abortion when the life of the mother is at stake, it actually requires it. What about other instances, which are not life threatening? One such situation, described in the Talmud, is the case of a pregnant woman sentenced to death by hanging. If the execution (which is supposed to occur immediately) were to be put off until she delivered the baby, she would suffer the agony of additional waiting for the execution. But if she were to be executed while still pregnant, the trauma of the execution would induce labor. To protect the woman from this additional humiliation and disgrace, the fetus ought to be aborted before the execution.

Other Jewish authorities approach the question of abortion from a different perspective. According to this view the issue is not whether the fetus is a nefesh but rather that the fetus is like "a pursuer intent upon killing a victim" -- in this case the mother. A third party can kill a pursuer. By this reasoning the fetus ought to be aborted, but only if the birth of the baby will kill the mother. This line of reasoning makes it harder to justify abortion in any other than life-threatening circumstances.

The legacy of these two different perspectives leads to two different Jewish approaches toward abortion. The more restrictive, based on the "pursuer" argument, is that abortion is only justifiable in the case of life threatening circumstance. The second more lenient view is that since a fetus is not a nefesh, abortion can be justified in a wider range of circumstances. But even in the second view, fetal life is potential life, and therefore abortion remains an extremely serious decision.

Because Judaism requires abortion in certain instances, any legislation that prevents abortion, even late abortion, is a violation of the free exercise of religion. Were a court to decide that life begins at conception, this would conflict with the Jewish view of the fetus as potential rather than actual life. Again, a violation of religious freedom. In addition, since one of the fundamental understandings of Jewish law is that the majority of the community must be able to live with a ruling, a pragmatic argument in favor of keeping abortion legal is that many women would seek out illegal abortions if that were the only option. Finally, because illegal abortion puts women's lives in danger, Jewish law's prohibition against endangering lives suggests that access to safe and legal abortion remains a Jewish priority.

This entire discussion, while crucial for the understanding of a Jewish perspective on abortion, in some way misses the point. In the real world, abortion is not just a legal question about when life begins or what is "a pursuer." Abortion is connected to the lived experience of individual women who have to decide whether to bear a child. It is ultimately a decision not about rights, but about responsibility. So there are other Jewish values that ought to be part of this discussion. One is that the commandment of pru ur'vu -- "be fruitful and multiply" -- is a blessing. This suggests that when conception takes place within the context of blessing -- a loving and healthy relationship -- procreation is appropriate. Otherwise, as in the case of rape, incest and other abusive sexual relationships, procreation ought not to take place. It also requires that contraception be available to everyone so that the choice of whether and when to bear a child is really a choice.