Was Superman a Jesus Figure? 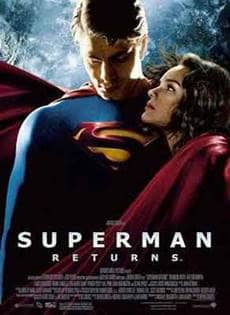 Bryan Singer's Superman Returns (2006) stirred fresh interest in the Superman-as-Jesus discussion. The Dallas Morning News wondered if Superman Returns could be re-christened "The Passion of Kal-El." The Associated Press called the film a gospel for Christian moviegoers. Writing for Time, Richard Corliss dubbed Singer's Superman "Earth's savior: Jesus Christ Superman." But despite its many allusions to the story of the Christian savior, the movie ultimately serves to distinguish Superman from his divine counterpart. The differences between the two add clarity to our understanding of Jesus.

There's a moment in the movie when Superman flies Lois Lane far out into the night sky above the earth. Holding her in his arms, he pauses and asks her what she hears. For Lois, there is only wonderful silence. But Superman, with his super hearing, listens to a cacophony of calls for help. His powers enable him to respond, and he feels an obligation to do so.

Superman's altruism is a familiar theme. I think we all know him as the ultimate Boy Scout. But director Bryan Singer wonders about the source of Superman's basic goodness. What motivates Superman to be so reliably self-sacrificing and helpful? In Singer's view, Superman's altruism is rooted in a sense of duty, specifically to his father Jor-El. Jor-El's kind counsel, first recorded by Marlon Brando in 1978 for Christopher Reeve's Superman, echoes throughout the film: "They can be a great people, Kal-El, if they wish to be. They only lack the light to show the way. For this reason above all, their capacity for good, I have sent them you...my only son."

This certainly seems to suggest that Superman is a pop culture Jesus. Jesus was another earnest and lonely outsider, struggling to live up to his father's expectations, regarded by many as the light sent to show us the way.

According to the traditional Christian interpretation of Jesus' life and death, Jesus was sent by God, his Father, to save humanity from the legacy of evil left over from the disobedience of Adam and Eve. In the wee hours before his arrest and crucifixion, in the garden of Gethsemane, Jesus fell on his face and implored, "My Father, if it is possible, may this cup be taken from me. Yet not as I will, but as you will" (Mt. 26:39). Jesus would have been glad of the chance to be released from his duty by his Father, but he would not rebel, and would not question. If his Father expected it, he would do it. He would sacrifice himself for others.

In that famous story of Adam and Eve and the fall from grace, it was God's tree of knowledge that was the source of the trouble. It proved too tempting, and Adam and Eve partook of it, despite having been told to stay away. The result was the absolute calamity that is the human condition of struggle, suffering, and death. If it possessed such terrible and destructive power, why did God put it there? One might indict God on this point. In being asked to sacrifice himself for humanity's sake, to save us at last from the legacy of Eden's rebellion, Jesus was asked to correct his Father's choice.

In the famous story of Superman's origins, Superman's father Jor-El sent his baby son to earth in a rocket ship just as their home planet of Krypton was destroyed. Jor-El also packed crystals in that rocket ship, and those crystals contained all the knowledge of Superman's home planet and people. Like Eden's tree of knowledge, the crystals that Superman's father placed in the rocket with the baby Superman hold spectacular power. In Superman Returns, Jor-El's crystals prove too tempting to Lex Luthor, who sets a series of events in motion that threaten to destroy the planet. Only Superman can save us. Again it falls to the son to correct the mistakes of the father.

How often do fathers use their sons to correct their mistakes, and how often do sons do as their fathers ask, out of a sense of duty?

In the movie's climactic show of Superman's strength, our hero lifts a rapidly forming crystal landmass into deep space away from the earth. We see Superman posed as Atlas, his head bowed beneath the gargantuan weight of crystal rock, his arms pushing up in a titanic struggle to overcome gravity. As portions of the superstructure break off into space, Superman is exposed to giant crystals of kryptonite. After a final heave to send the crystal mass away from the earth, a weakened Superman falls back to earth.

Here we see the movie's key visual allusion to the Christ story, Superman in cruciform pose. He falls, exhausted, arms outstretched, his back to the earth. The cape protects him from the heat of reentry. His outstretched arms slow his descent.