What's In a Name? Other Pope Benedicts 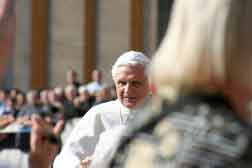 One was killed in prison; one was probably strangled. One sought peace in a time of war, one had a reputation as a thief and murderer, and one wasn't really a pope at all. The most recent was elected in 2005, and all of them have been called Pope Benedict. Let's take a look at a few of them.

The first pope named Benedict (575-579) most likely didn't have to get used to a new name after his election, since that wasn't common practice until the 10th century. This Benedict had to deal with barbarians at the gate and famine among his people, but we know little else about him.

The third Benedict (855-858) had a fairly peaceful reign, but getting to it wasn't: although properly elected by the Roman clergy and populace -- that's how popes became popes in those days -- he and his bigwig family had some powerful competition from another bigwig family who wanted a guy named Anastasius to be pope. As his friends dragged Benedict from his throne, Anastasius went to St. Peter's and had a real rock-star fit, damaging statues of Christ and Mary. The Emperor Louis favored Anastasius, but with Rome in an uproar, he sent his guy packing and let Benedict be consecrated.

Things didn't turn out quite so well for Benedict V (964-65), whose short rule lasted only a few months. Two different men already claimed to be pope, but the Romans elected Benedict -- a move that made the Emperor Otto hopping mad, since he supported one of the other guys. He laid siege to Rome and starved it into submission, then presided over a council that deposed and exiled Benedict. And even that was preferable to the fate of Benedict VI (973-974), who was strangled in prison as another man staged a coup.

Both Benedict VIII and Benedict IX found out that if your name was Theophylactus and your dad was Count of Tusculum, you had a good shot at becoming pope. Benedict VIII (1012-24) was one of the great warrior popes, heading an army to fight the Saracens, who had landed in Tuscany. He was definitely a family man, naming his brother ruler of Rome and his father Naval Prefect and solidifying his family's hold over the city; in fact, his brother would eventually become Pope John XIX.

The next Theophylactus-turned-Benedict managed to become pope three separate times. His father greased the right palms and got his 20-something son on the throne, but this Benedict was not cut out for the life of sanctity. He had a reputation as a thief and assassin, and at one point the people of Rome tried to kill him. That didn't work, but a popular uprising a few years later booted him out of office. Less than a year later, though, Benedict managed to reclaim the throne and then promptly sold it to the man who became Gregory VI. With scandal following papal scandal, the Emperor Henry III called a council that deposed any and all people claiming to be pope and elected Clement II. Unbelievably, the next year Benedict was able to reclaim the throne for a third time before being sent packing yet again, this time for good.

About ten years later, another man took the throne as Benedict X...or did he? He was deposed and excommunicated by a council supporting a rival and is now considered an anti-Pope, but two-and-a-half centuries later a successor styled himself Benedict XI, and thus the numbering has remained.

Benedict XIV (1740-1758) came to the throne during the thick of the Enlightenment, but where others saw a threat, he saw a new opening in the life of the Church. He dialogued with non-Catholic Christian groups, cut back on feast days, reformed clerical education, and denounced the enslavement of native peoples in the Americas. But he wasn't open to everything: he also restricted missionaries in India and China from using native cultural symbols in ways that he thought allowed pagan practices to gain a foothold in the Church.

The 20th century saw only one Pope Benedict (number XV, 1914-1922). Most people expected this former professor of diplomacy to glide through his papacy, but reality was a far cry from expectation. During World War I Benedict refused to take sides, claiming impartiality and speaking out against what he saw as a large-scale senseless massacre. Many both inside and outside the Church saw this as weakness, but Benedict didn't waver in his prophetic stance for peace.

When Joseph Ratzinger was elected in 2005, he chose the name Benedict XVI. So what's in a name? Fifteen centuries, sixteen Benedicts, seventeen papacies, and an anti-papacy. It's a whole Church history lesson all by itself.