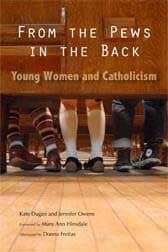 I've spent much of the week distracted from my work as a nutrition educator trying to find an apartment in a new city.  I'm moving to Evanston, Illinois, from small-town western Washington in a month.

I have moved around a lot since I graduated from college seven years ago.  Yet, somehow, I always expect the transition of moving from one community into another to be easier than it is.  As I reflect and prepare for this coming transition, I'm beginning to wonder if maybe transitions like this one are difficult for a reason.  Being a part of a community is not simple.  Being engaged with the people in our lives is a complicated process. And so maybe it there is something good about the fact that it's not easy to disengage and reengage in communities.

As Jen and I were editing From the Pews in the Back, I thought a lot about what Catholicism means in my life and what roles the Catholic community has played in my life.  I remember realizing that in all the places I have lived in the last decade, I can always walk into a Catholic church and feel a sense of familiarity, connectedness.  I know the prayers, I know when to stand and sit and kneel.  I know how to shake hands and I know to smile warmly at the person passing out the bulletins in back.  There is something grounding in that for me.  Even as I struggle to find and connect with communities, there is at least one place where the struggle is calming rather than scary.

Sociologist Dean Hoge and a crew of other sociologists conducted an oft-cited study of young adult Catholics, Young Adult Catholics: Religion in the Culture of Choice.  In summarizing their findings, the Hoge team suggested that there is what they called "Catholic glue" among young adult Catholics -- a sort of hard-to-pin-down-with-surveys something that keeps young adults calling themselves Catholic.  Even with low Mass attendance, with low adherence to some parts of Catholic doctrine, even with high frustrations with Catholic hierarchy, young adults who were baptized Catholic as children tend to still say "I am Catholic" when asked (186).

I think my Catholic glue has something to do with the sense of calm and groundedness I feel in a Catholic church...wherever I happen to have landed.  The sense of community and connectedness I have wrapped around my Catholic experiences.  Even though I have felt estranged by the hierarchy, am not a regular Mass attendee, and often wonder if I should become a Buddhist -- still, I am Catholic.

Kate Dugan is a co-editor of From the Pews in the Back: Young Women and Catholicism.  This fall, she will be starting a Ph.D. program in Religion at Northwestern University.