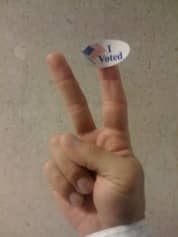 Critics today charge that religion has no place in politics, that it is a private matter and cannot be brought to bear on the contentious issues that divide a pluralistic society. Yet there seems to be something in the ways that Catholics look at history, at morality, and at duties toward the common good that encourages them to be active in building a just society.

The Patheos Catholic Gateway asked two prominent commentators -- one Democrat and one Republican -- to explore the Catholic commitment to political life and how Catholic faith ought to shape a person's understanding of politics. Here conservative Deal Hudson comments on Catholics and their role in the state.

What is your biggest concern about the present state of Catholic participation in politics?

Critics who call Catholicism, or any form of Christianity, a "private matter" either don't understand it or are trying to intimidate people whose cultural and political beliefs are inimical to their own.  Faith is not an emotion or a feeling -- it is a kind of knowledge with a content that can be communicated and applied to history, social structures, traditions, and personal existence.

Whenever Christians recite their credo, "I believe in God the Father Almighty....," they are articulating the central propositions of their faith.  Those propositions are drawn from both scripture and its interpretation by the Church through the centuries. Catholics consider the teaching of their faith as something true, and, as such, is not just true for them, but true for everyone, since that is the nature of truth itself.

What Catholics believe is true about human life and society is going to direct their words and actions as members of families, communities, and nations.  For example, Catholics will insist that our laws and political structures respect the innate dignity of the human person and the inalienable rights that are ingredient to that dignity.  Both human dignity and human rights represent aspects of each person that cannot be taken away by any political entity. They exist prior to any state, therefore, the state should govern its citizens in recognition of that dignity and those rights.  Again, because Catholics see human dignity and human rights as universally true, they will demand that any temporal state -- one that will come and go on the sands of human history -- integrate its laws and policies with respect to the truth about human life.

Looking at "the big picture," Catholics understand human dignity in the same way -- they want people treated with respect, whether they are poor or infirm, an enemy in war, or a criminal guilty of harm against others.  Thus, Catholics have protested the death penalty and have delineated strict guidelines in regard to the waging of war by one country against another, i.e., just war theory.

Where Catholics disagree, and this makes headlines nearly every day, is how the state should treat the human dignity and human rights of the unborn.  Few Catholics deny that dignity, because that is directly opposed to explicit Catholic teaching, but they do disagree on whether or not the state should enact legal protections for the unborn.  Some think it is an "imposition" of a religiously based morality on a secular state. Others, like myself, think it is an aspect of the truth about human life which the state, whether secular or not, should recognize.

My chief concern about the participation of Catholics in public life is their unwillingness to follow the truth the Catholic faith urges them to do, to seek the protection of human dignity and human life for all persons, including those at the beginning of life -- conception -- and those at its end, those who are dying.

Deal W. Hudson is the Director of InsideCatholic.com and the author ofOnward Christian Soldiers: The Growing Power of Catholics and Evangelicals in the U. S.