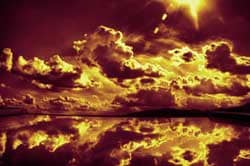 I direct an interfaith environmental group and do a lot of guest preaching on religious environmentalism.  I often offer a children's sermon where I ask children to point in the direction they think they'll find God.

The vast majority of kids point up, with confidence.  Some look confused.  A few sweep their fingers around them in a circle, or point at their hearts.

I've used this sermon dozens of times, and there's only one direction I've never seen any child point.

In pre-modern times, there was a rationale for this.  God was at home in heaven and heaven was up.  The struggles and suffering of earthly life meant that getting away from the earth by going up to heaven was good.  Going to hell meant going down, deeper into creation.  To move toward God meant to move away from the earth.

This perspective was more understandable when we humans struggled to survive -- though indigenous theologies much older than Christianity routinely embrace creation.  Today, it involves serious drawbacks.

First, it's unfaithful to the Bible's witness about the destiny of "down," the fate of the earth.  Numerous theologians, among them Steven Bouma-Prediger, have noted that the Gospels, Paul's writings, and Revelation all affirm that when Jesus returns, it is not to destroy the earth but to revitalize and renew it.  John 3:16 is very clear in saying, "For God so loved the world ..."  Not just Christians, not just the human race, but the "world," the "kosmos," the entire created order.

One of the passages that's most often used to justify the view that we don't want to be "left behind" -- 1 Thessalonians 4:13-18 -- says that at the time of the Second Coming, when Jesus draws near, those who have "fallen asleep" will join those who are alive in Christ and will go out to "meet the Lord in the air."  For centuries, we've assumed that this represented the first stage in a mass exodus from creation.  Not so.  The Greek verb "go out" is the same verb used in Acts to describe the joy with which early Christians in Rome "went out" to meet Paul -- in order to escort him back into Rome (Acts 28:15).  The same sense lies at the heart of the parable of the Prodigal Son, where the loving Father "goes out" to meet his lost son, to welcome him home (Luke 15:20).

This creation-affirming view -- Christ coming back not to destroy the earth but to redeem it, welcomed joyously by those who love Him -- doesn't square with a God who disdains the planet and wants us all to escape.

Second, centuries of thinking that "God is up" make it possible for us to entertain large-scale destructive visions, justified in the name of security and faith.  Whether it's James Watt, a former Secretary of the Interior, saying, "After the last tree is felled, Christ will come back," or Rudy Giuliani saying recently that he would use nuclear force to prevent Iran from acquiring nuclear weapons, the logic is the same.  If we believe our true home is "up," a strange logic leads us to think that we can destroy our actual earthly home.  It doesn't matter whether the motivation is religious or political -- the storyline is the same.  Acts of unspeakable violence against creation and humanity are justified in the name of God, or in the name of our safety, even while those acts alienate us from the Creator and make us far less secure.

So what's the answer?  The church needs to teach, over and over, with a pretty fierce relentlessness, that God is down -- underfoot, right among us.  Teach it hard, and push the members of our churches to understand and live into the fact that the moral challenge of our time is to honor the Creator by creating an environmentally sustainable human presence within Creation.  And then don't just teach it -- live it.  In several Scandinavian countries, each community has a center for ecological sustainability, a local clearinghouse for information and resources on how to live in a better relationship with the earth.  Wouldn't it be great if houses of worship could play that role in the U.S. -- a new kind of "motherhouse" of support for the mothership, "our island home?"

Getting back to my children's sermon, I don't know where God lives.  But I do know what God loves, and where God acts.  Down needs to become the new up, down here on earth, down in the midst of creation, down where we believe that God was born, and died, and rose, and where God will return in Christ to restore and to redeem "all things."

The Rev. Fletcher Harper, an Episcopal priest, is Executive Director of GreenFaith, an interfaith environmental coalition based in New Jersey.