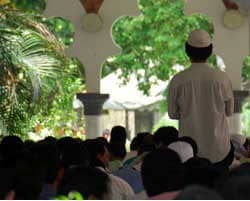 American Muslims face unique and troubling challenges in trying to fulfill their religious obligations to give charity or zakat. The laws meant to serve the legitimate purpose of preventing the diversion of humanitarian aid to terrorist groups are, instead, overly broad, ambiguous, and constitutionally suspect.

Sweeping powers granted to federal agencies in the wake of 9/11 resulted in the closing of nine American Muslim charities. However, the majority of these charities were not charged with any wrongdoing and only one investigation resulted in a conviction.   In addition to the closures, aggressive law enforcement tactics like widespread FBI interviews with donors and mosque surveillance has led to a pervasive chilling effect in the American Muslim community with respect to charitable giving. The full extent of this chilling effect and related civil liberty issues is the subject of a recent report issued by the American Civil Liberties Union entitled Blocking Faith, Freezing Charity.

But, in recent months, these dark clouds are giving way to sunshine - sunshine that is thawing the chill felt by American Muslims, as recent public attention has shined a welcome light on the issues.   When President Obama gave his highly-regarded Cairo address, he noted that the "rules on charitable giving have made it harder for Muslims to fulfill their religious obligation," and he made the following pledge: "That's why I'm committed to working with American Muslims to ensure that they can fulfill zakat." As if to amplify the President's words, only days later, the ACLU issued the Blocking Faith, Freezing Charity report, which generated significant media coverage.

Moreover, recent court decisions are chipping away at some of the more problematic aspects of these laws. A federal court recently ruled that the Department of Treasury had violated a charity's basic due process rights. In January, a federal appeals court upheld a lower court's ruling that the "material support" provisions of certain counter-terrorism financing laws were overly vague and therefore unconstitutional. In addition, advocacy groups for the nonprofit sector, like the Charity and Security Network and Grantmakers without Borders continue their efforts to reform charitable giving policies and pull the pendulum back toward the middle after its far swing to the right during the Bush administration.

Some observers will note that the administration has not yet taken concrete action to reform the underlying laws governing charitable giving. That may be the case. However, there are reasons to be optimistic. The Secretary of the Department of Treasury Timothy Geithner recently gave his own commitment to working with representatives from the nonprofit sector on the issues. But actual reforms of the underlying laws will likely need time. In office for only seven months, President Obama is handling an unprecedented economic crisis and two wars, and engaged in an all-out effort to reform our broken healthcare system. Many key political appointments at the agency level, including the Department of Treasury, remain to be filled. Those appointees who have been appointed need time to get situated, as they are critical in pushing the President's agenda forward.

But let's put all that aside for a moment: the economic downturn along with rising unemployment and lower consumer spending means charitable contributions are down, and many American Muslim nonprofits are cutting staff and scaling back on important programs. This Ramadan, you simply cannot shy away - even if you may feel constricted financially. The need is simply too great.

Many donors, particularly those immigrants from Muslim majority countries, feel strongly that their zakat should go to the poor of their countries of origin - especially when those countries are suffering from man-made or natural disasters.    However, donating to causes overseas can be very complicated. When contributing internationally, consider these few suggestions that can help minimize the risks of running afoul of counter-terrorism financing laws: