G-d Gave This Land to Us 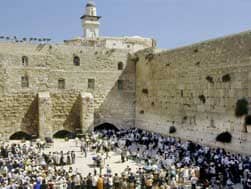 It has always been a dream of mine to visit Jerusalem, but I never wanted to do it on a Christian "Bible tour." It just conjured up endless arguments with the tour guide, and the dread that everyone on the trip would behave in a heightened spiritual state because it was the land of the Bible and of Jesus.

So, when one of my friends asked if I would be interested in traveling to Israel as a guest of American Israel Education Foundation (AIEF), a charitable group associated with AIPAC (American Israel Public Affairs Committee), I could hardly say no. After all, AIPAC is a major player in Washington D.C. and around the world with regard to support and advocacy for the state of Israel and her people. Besides, I figured I could handle a political trip better than a sappy religious one.

I should have known better. I am a religion scholar. It is always about religion, faith, belief, and how it is understood and functions. So at the outset, let me say that my trip to Israel for one week in July was funded by AIEF, to whom I am grateful, but the thoughts and observations that will follow are mine, and mine alone.

The group chosen for this trip was a group of African Americans who work in Christian publishing, seminary, or divinity school contexts. Our group was the first of this particular kind that AIEF has taken to Israel. Educational trips are often for supporters or potential supporters of AIPAC, or governmental officials who have little or no knowledge about the modern state of Israel. The trips are designed to give a historical, social, and political face to the modern state of Israel, as well as to gain support for Israel's policies.

Given the intensity of the time spent (one week) and the myriad of people we met -- from Knesset members, to rabbis, to ordinary citizens, and repatriated Ethiopian Jews -- the messages came fast and furiously. In my perception, one message floated out above the din of them all: "G-d gave this land to us."

Whether talking to religious or secular Jews, versions of this refrain in various iterations haunted me throughout the week. What was striking to me was that many Israelis I met, to varying degrees, separated claims for the nation's existence from religious concerns, even though the claim that G-d gave this land remained and undergirded much of the apologia.  Most often, it was posited that Jerusalem was in the Bible, and not in the Quran.

The right to exist as a nation is, then, connected to other rights, the rights claimed in varying degrees, to build settlements, to remain in settlements, to arm, to police the scope of the small nation of Israel and the Palestinian territories, and to defend the nation. The message was embedded within the contours of our trip. Whether on tours of Galilee, the Wailing Wall, Masada, or Sderot, or sharing Shabbat with a local professor and his family, the trip to Israel was designed to give us a quick immersion into Israeli life. We became familiar with terms like Aliyah (going up, to return to live in Israel) and terminals (checkpoints near Palestinian territories).

We got a better understanding of the history of the Golan Heights and the Six-Day War, and we visited Yad Vashem, a starkly beautiful memorial to those who were murdered in the Holocaust. The contours of the faith were in stark relief as well, revealed in our meetings with secular Jews, in watching the Haredi (orthodox Jews) and their prayers at the Wailing Wall, and in learning about accommodations for Orthodox men's education at a local college.

Yet for all of this, I remain confused, and somewhat vexed, for want of a better word. The crux of the trip centered around several major issues, undergirded by G-d's giving of the land in the Hebrew scripture: the right of Israel to exist as a nation, the tensions surrounding Iran and its unpredictability, and the current tensions surrounding the issue of ceasing further settlement in the West Bank.

In that respect, much of what we heard from our tour guide and other speakers focused on reliving the establishment of Israel in 1948, the role that Great Britain played in that original partitioning of the land, the manner in which "Palestine" was created, and the shifting border changes that occurred during the 1967 and 1973 wars. What became clear to us was that history was yesterday in Israel, and in every way it played a role in current policy, and shaped those who were considered friends of Israel, and enemies.

About Anthea Butler
Anthea Butler is currently Associate Professor of Religion, University of Pennsylvania. Her most recent book, Women in the Church of God in Christ, Making A Sanctified World published on the University of North Carolina Press, chronicles the history...