Harry Reid on Being an LDS Democrat 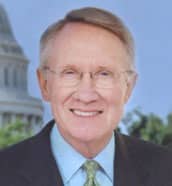 Harry Reid formally joined the Church of Jesus Christ of Latter-day Saints during his college years. In other words, he became a Mormon. Though he would later attain his current position as Senate Majority Leader, his party affiliation as a Democrat makes him statistically part of a minority among Mormons in the U.S.

In 2007, Reid addressed students at LDS-owned Brigham Young University about his experiences with religion and politics. In particular, Reid addressed his views about being both a Democrat and a Mormon in no uncertain terms. "My faith and political beliefs are deeply intertwined. I am a Democrat because I am a Mormon, not in spite of it."