Islam and Ecology: A Bestowed Trust 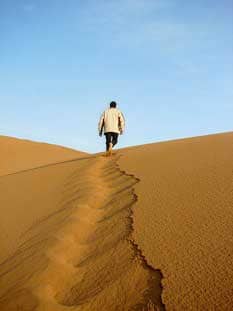 The Qur'an, Islam's primary authority in all matters of individual and communal life, as well as theology and worship, tells of an offer of global trusteeship that was presented by God to the Heavens, the Earth, and the Mountains (Sura 33:72), but they refused to shoulder the responsibility out of fear. Humankind seized the opportunity and bore the "trust" (amana), but they were "unjust and very ignorant."

Even so, God through mercy has guided and enabled humankind in bearing the responsibility of the amana, although they have in the process also been subjected to punishment for their hypocrisy and unbelief. The Qur'an, however, is clear that God is the ultimate holder of dominion over the creation (e.g., Sura 2:107, 5:120), and that all things return to Him (Sura 24:42) and are thus accountable each in their own ways. There is, in the Qur'an and in the teachings and example of the Prophet Muhammad, preserved in a literary form known as Hadith, much with which to construct an authentic Islamic environmental ethic that both sustains what Muslims have achieved traditionally in this direction and leaves open a wide avenue for creative and innovative solutions in the contemporary context.

With respect to humankind's stewardship of the earth, the privilege entails a profound responsibility. Other living species are also considered by the Qur'an to be "peoples or communities" (ummas; Sura 6:38). The creation itself, in all its myriad diversity and complexity, may be thought of as a vast universe of "signs" of God's power, wisdom, beneficence, and majesty. The whole creation praises God by its very being (Sura 59:24; compare with 64:1).

"With Him are the keys (to the treasures) of the Unseen that no one knows but He. He knows whatever there is on the earth and in the sea. Not a leaf falls but with His knowledge: there is not a grain in the earth's shadows, not a thing, freshly green or withered, but it is (inscribed) in a clear record" (Sura 6:59).

According to the Qur'an, the creation of the cosmos is a greater reality than the creation of humankind (Sura 40:57), but human beings have been privileged to occupy a position even higher than the angels as vicegerents of God on the earth. Even so, they share with all animals an origin in the common substance, water (Sura 24:45), and they will return to the earth from which they came. The idea of human vicegerency on earth has drawn much criticism in environmental ethics, principally since the publication of an influential article by historian Lynn White some thirty years ago ("The Historical Roots of Our Ecologic Crisis," Science 155 [1967] 1203-1207).

Muslims, as well as Jews and Christians, have had to face the intrinsic problems of such a position, historically as well as in contemporary global economic, political, and social life. But Muslims are reflecting on their fundamental and enduring religious teachings and discovering theological and moral bases for an environmental ethics that have been present, whether explicitly or implicitly, both in their sacred textual traditions and in their habits of heart, thinking, public administration, and daily life since Islam's founding. A common conviction among Muslims in this discourse is that nature is not independently worthwhile but derives its value from God.

The earth is mentioned some 453 times in the Qur'an, whereas sky and the heavens are mentioned only about 320 times. Islam does understand the earth to be subservient to humankind but it should not be administered and exploited irresponsibly. There is a strong sense of the goodness and purity of the earth. Clean dust may be used for ablutions before prayer if clean water is not available.

The Prophet Muhammad said that: "The earth has been created for me as a mosque and as a means of purification." So there is a sacrality to the earth, which is a fit place for human's service of God, whether in formal ceremonies or in daily life. A former United States Secretary of the Interior said stewardship of the environment was not really such an urgent matter in light of the prophesied destruction of the natural order on doomsday. In contrast, the Prophet Muhammad said, "When doomsday comes, if someone has a palm shoot in his hand he should plant it."

Muslims envision heaven as a beautiful garden that the Qur'an describes in many places. If life on earth is preparation for eternal life in heaven, then the loving care of the natural environment would seem to be appropriate training for the afterlife in the company of God and the angels in an environment that is perfectly balanced, peaceful, and verdant.