Mormon Belief and the Environment

By George B. Handley 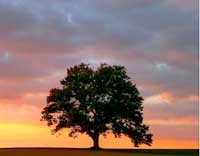 One cannot find any official position of the Church of Jesus Christ of Latter-day Saints (Mormon) on contemporary environmentalism. This apparent silence has led some to criticize the LDS Church for appearing to support the often noisy anti-environmentalism of many of Utah's politicians and citizens and of business and development interests.

Maybe we have become too accustomed to looking to institutions and political processes for answers when we should instead look to ourselves. Perhaps a ground-level, faith-based practice of good stewardship will be helpful in reducing unnecessary polarization and, more importantly, in producing more fruitful and sustainable practices.

Although official positions are not identifiable, LDS scriptures and teachings provide a consistent picture of the role of human beings as stewards accountable before God for the use and care of His creations. Scholarly examinations of LDS theology and history have repeatedly demonstrated that the religion offers a unique and important perspective on the notion of environmental stewardship and a foundation for a strong environmental ethic.1

This truth about Mormonism has not been lost on all of its believers. What often goes unnoticed is how many Mormons are actively involved in environmental causes and how directly LDS belief has motivated their efforts. In February of 2004, Brigham Young University sponsored a well-attended symposium, entitled "Our Stewardship: Perspectives on Nature," that explored the theological foundations for stewardship.

In addition to demonstrating that LDS belief is not incompatible with good stewardship of the earth, the symposium cleared up at least one more myth regarding environmentalism: its spelling notwithstanding, it is not an "ism" in the traditional sense. It is an inadequate word to describe a whole host of often-competing movements, organizations, philosophies, and values, not all of which are compatible with Christianity in general or Mormonism in particular.

But rather than using these occasional incompatibilities as an excuse to demonize the "movement" of environmentalism and disregard the legitimate concerns that it continues to raise, the symposium's participants presented an LDS conception of stewardship that resonates well with the Christian environmental ethics articulated by ecotheologians of many stripes, including Wendell Berry, John Cobb, Wesley Michaelson-Grandberg, and others. The papers challenged LDS believers to do more to meet their responsibilities toward God's creations. A book of selected proceedings published by BYU's Religious Studies Center is forthcoming.

What, briefly, are the theological underpinnings of environmental stewardship in the LDS religion? First, the LDS worldview stipulates that the world is holy and animated by spiritual matter. We are told in what is believed to be a restored account of the creation in The Pearl of Great Price: "I, the Lord God, created all things... spiritually before they were naturally upon the earth" (Moses 3:5). This record of the creation goes on to explain that this makes plants as well as animals "living souls" (see Moses 3:9, 19).

The notion that physical matter and all living things have some living spiritual character grants a sacred identity to the nonhuman realm, and this would seem to give us pause to consider the ethics of our use of such inspirited material. This is made clear in a revelation to Joseph Smith: "The beasts of the field and the fowls of the air, and that which cometh of the earth, is ordained for the use of man for food and for raiment, and that he might have abundance. But it is not given that one man should possess that which is above another, wherefore the world lieth in sin. And wo be unto man that sheddeth blood or that wasteth flesh and hath no need" (D&C 49:18-21).